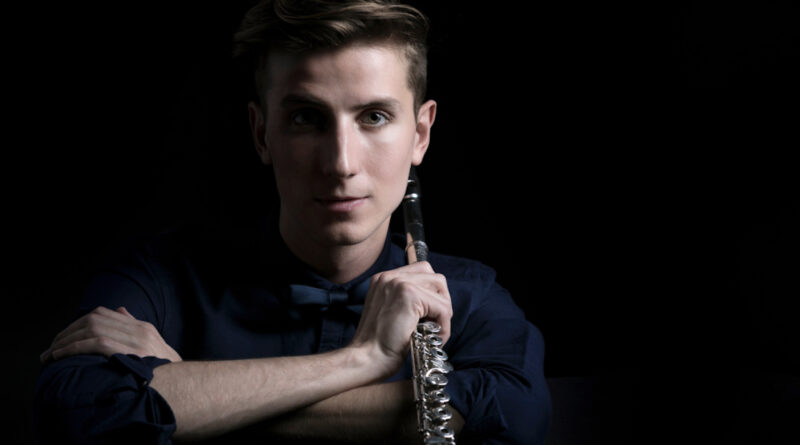 Denis Savelyev is a soloist, chamber and orchestral player. First-prize winner of the 2017 NYFC Competition, “Rising Star'' at the 2021 Galway Flute Festival, and Young Artist of 2019 NFA. From Lviv, Ukraine, he earned BM at Gnesin Academy of Music in Moscow, MM at Mannes College and MM at The Orchestra Now, Bard College, New York. Now he is pursuing DMA at Peabody, JHU, under the mentorship of Marina Piccinini. He performs and gives lessons around the world, loves to collaborate with artists and is passionate about teaching.

The war in Ukraine is unimaginable. What we see on the news is nothing in comparison to the reality of being there. I am fortunate to be here in the US, and have my parents on a safer side of the country. However I know a number of people who stay in zones of constant attacks and they are scared of losing their lives. To me it is a real catastrophe for Ukraine, for Russia and for all of the world too, we see how it is affecting our lives. Generally, I am a positive person and help others to be positive in any situation, and this situation is difficult for me to remain positive. However, I am convinced about a brighter future, rebirth of a beautiful country I grew up in; a fresh, more independent start with a feeling “we earned it”. This crisis will also teach about unity and its importance. I am excited for this to be over and truly hope for this to happen very soon.

History between Russia and Ukraine is very complicated and goes back over a thousand years to the founding of the Kievan Rus’ culture on the banks of Dniester River in late 9th century. There has always been a lot of pressure on Ukrainian culture, language, traditions to the point when it was often prohibited. Ukrainians suffered through a lot and that explains their unstoppable resistance today. The first official independence Ukraine was able to declare in 1918 but because of Soviet forces it became Republic of Ukraine until 1991, when Ukraine was declared as an independent country. Since then, Ukraine has been growing, becoming more advanced and influenced by the western world.

I was born in Lviv, in the capital of western Ukraine. Lviv is historical, at least 800 years old. The Dopplers were born there and Mozart’s son had a strong connection with it too. The history and beautiful architecture gave me strong artistic views which I pull from in music. Today, I am in the US, however I am Ukrainian in my heart. Every summer I try to come to Ukraine and I give performances to all the people I knew from when I was little. I hope to be able to come to Ukraine this summer and give a celebratory performance, victory over the war.

To answer the question on issues between Ukrainian and Russian governments I have to be a politician. A politician who knows the economy and history of both countries. I do have opinions as we do. We all read news, and we are fortunate that we are not being blocked from reading independent sources, unlike people in Russia today. It is sad to learn how ignorant some people are in Russia to what is happening today. I hope for the bright future of both countries, however it will take some time before relationship between the two countries to improve.

Musicians in Ukraine take completely different roles today, some volunteering to gather help for the military of Ukraine, others organize shelters for those who are fleeing. I know a number of musicians who stay in Europe now as refugees. They all want to go home but are not able to do so. A lot of Ukrainians who can create — they use their talent in many creative ways by showing their culture, letting unknown music be discovered. It is so fortunate to see the world being so supportive of gathering help, funds, clothes, shelters. This is what unity is and we should never forget this feeling.

There are many ways to help, financially and emotionally. You can gather a performance in support of Ukraine. You can do a fundraiser to help refugees and those who suffer in Ukraine. You can learn about the country you know very little about to find more understanding of what is going on. There is always someone from Ukraine around you, give them a hug. Believe in victory over this crisis, believe in the strength of the people who suffer this very minute, and believe in a better future. All this is a big help, not all of it requires financial involvement. A thought is powerful enough on its own. The more people have the same thought in mind—the more powerful the outcome.