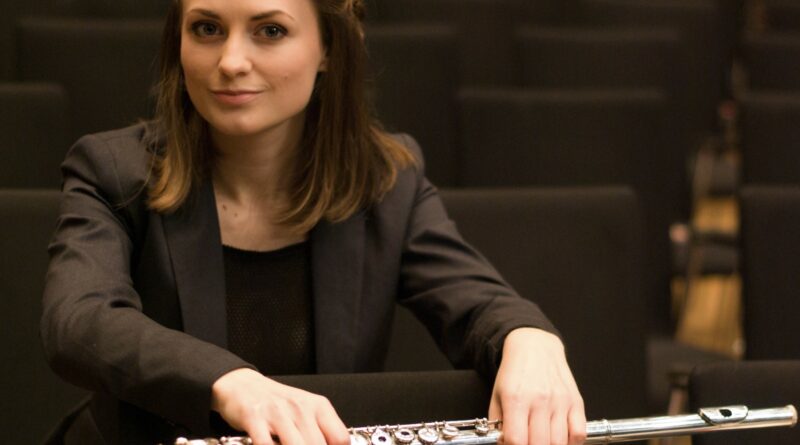 Nadiia Duldiier (Suslova) was born in 1991 in Luhansk, Ukraine. Graduated from the Special Secondary Music School named by Mykola Lysenko in Kyiv, the National Music Academy of Ukraine by Pyotr Tchaikovsky, class of Vladimir Turbovsky and a master's degree from the Lviv National Academy of Music by Solomiya Krushelnytska, class of Olena Pavlenko. A winner of many international competitions. Since 2010 she has played the first flute of the Ukrainian-Austrian orchestra K&K Philharmoniker for almost 10 years, the last two years I’m a Principal flute of the Odessa National Philharmonic Orchestra, with music director and principal conductor Hobart Earle.

I could not believe that this (war) was possible in the 21st century. It is not a crisis - this is a full-scale war. Civilians, children and women, die every single day. Air alarm sirens sound every day, missiles and shells fly to Ukrainian lands. Cities are destroyed, people live in metro stations and basements, hiding from air raids and shelling. Life has changed dramatically. In dark times, we can become a source of light for others - all Ukrainians have united in front of a common enemy; they help each other, volunteer and provide humanitarian aid, raise funds to support the Ukrainian army and refugees, host displaced people. Everyone became like one family! Over the past month, I met many incredible people who are ready to work for free from morning to night, to work hard for those who need it most. I am very grateful to all those who are working on their own front and bring us closer to victory - to our Armed Forces of Ukraine, territorial defense, doctors, volunteers, donors who collect funds and everything that is necessary for humanitarian aid, volunteers who carry humanitarian cargo to the major hotspots in Ukraine. To all who dream about peace, which means our victory! We are defending our motherland, our native Ukraine; the truth is on our side!

The history of Ukraine is a millennial history of the struggle for freedom and independence from the empires that wanted to enslave and destroy all Ukrainian culture and identity. History has been rewritten more than once when governments changed. In the same way now in russia new tales are being invented about Ukrainian lands, and unfortunately, ordinary people blindly believe what the ruling government says. I'm not a historian, but I'm sure that those looking for the truth will find it.

My parents moved from northern Kazakhstan to Luhansk in 1989; my father is russian, my mother is Ukrainian from western Ukraine. I have always considered myself a Ukrainian, although I grew up in a russian-speaking environment - everyone spoke russian in school and everyday life. When I started working in the Ukrainian-Austrian orchestra based in Lviv, I had a chance to improve my proficiency in Ukrainian. In 2014, russia occupied Luhansk and Donetsk oblasts - my parents did not want to leave their home, and eight years of active russian propaganda made themselves known - now my family does not accept the facts and arguments; they are supporting the aggressor's side. I feel like an orphan in my own family at such a difficult time, and this breaks my heart. But I am happy that now I am surrounded by kind and incredible people from all over Ukraine who we volunteer with - we organize humanitarian aid supplies from Europe and send them to Kharkiv, Kyiv, Dnipro, Zaporizhzhia. If you also want to join and help - all the details and information are available on the website https://saveukraine.city/ . Together to victory! Everything will be Ukraine! 💙💛

I am an adherent of freedom; it probably runs in my blood! (laughter) I believe that what is happening now is the unhealthy ambitions of one sick person with enormous power. Much of humanity suffers from this. But there is opposition to any action, all the truth will be revealed sooner or later, and justice will prevail! I was always apolitical and had little interest in politics until the war came to my house. Now I clearly understand that our common future depends on each of us! I am very grateful to those who don't keep silent and go out to the anti-war protests, fight for freedom and democracy!

Before the war, our orchestra, as always, was preparing for a planned concert with an exciting program - “Chant du rossignol” by Igor Stravinsky, Violin concerto by A. Dvorak and Fantasia on a Theme by Thomas Tallis. But one day before the concert, we heard the sound of a flying missile and then an explosion that shook the whole house in the morning. A new reality began. All plans and concerts were canceled; we were forced to adjust to the new reality. Many of my acquaintances and friends had to leave their homes, saving their lives and their children. Those who stayed went to protect the homeland, changed the musical instrument to a machine gun, went into territorial defense, became a volunteer or an organizer of humanitarian aid. Someone combines all this by participating in charity concerts and raising funds to help Ukraine.

The profession of a musician is not just a specialty; it is a lifestyle, a state of mind, it is a mission that brings goodness and love, makes the world and humanity better. I really want to return to our normal life and bring people joy and deep emotions by doing our main task - playing music.

The whole world is now following the events in Ukraine, sympathizing and sharing our grief. Many countries support us by sending humanitarian aid, accepting refugees, donating money to the Ukrainian army and helping the population. It is essential not to remain silent, to tell society about the crime that is taking place in the heart of Europe. First of all, we strive to end the war, for this we need full support from the world society! Don't be silent; go to peaceful rallies. If you have the opportunity, organize the collection and dispatch of humanitarian aid, military equipment, medicines, essentials. All this is now extremely necessary for Ukrainian citizens. We are very grateful to everyone for their sympathy and help! May God protect your families and our Ukraine!

Author's Note: The "r" for russia has intentionally been left in the lower case.