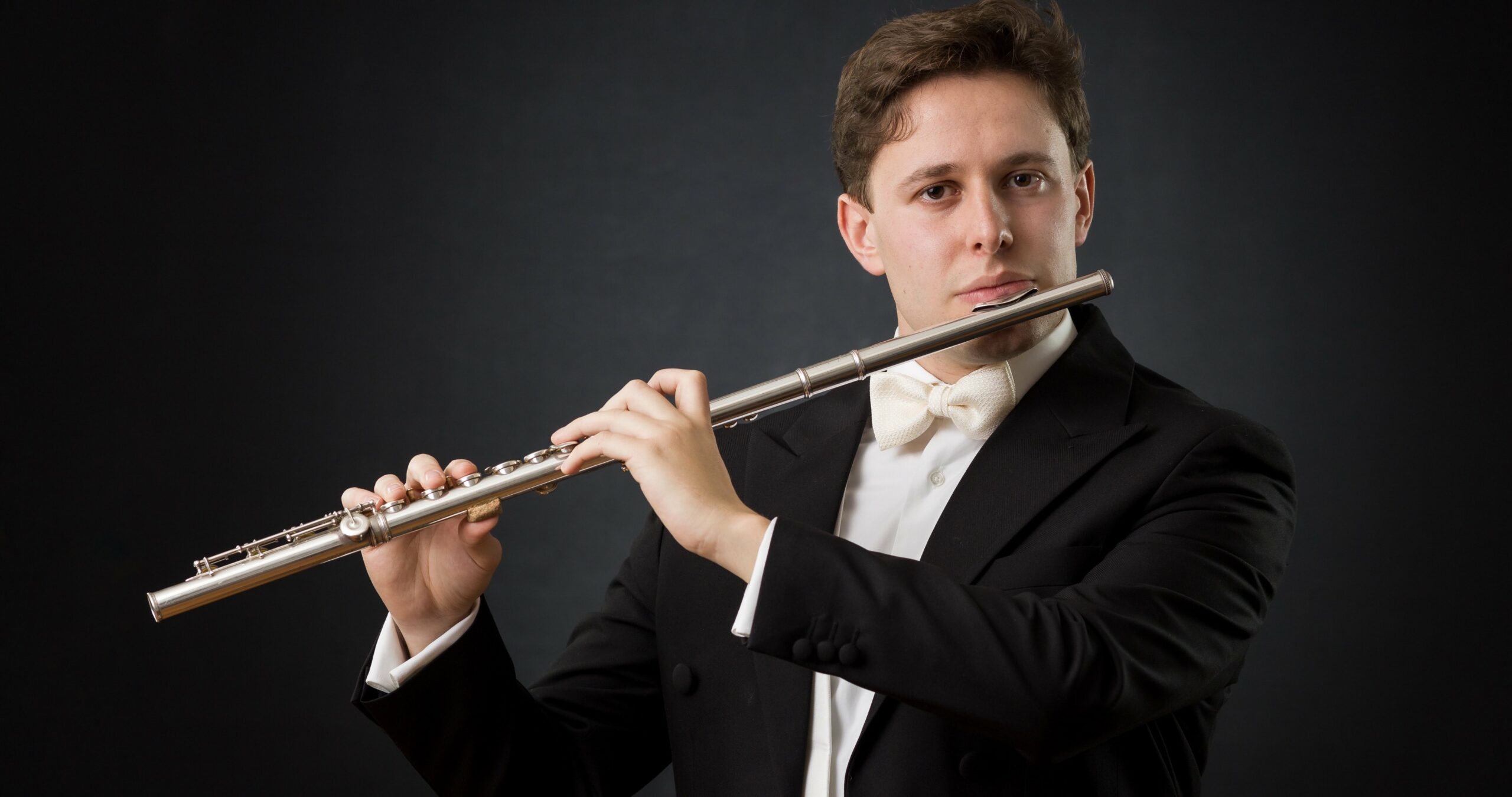 Featured Interviews Issues May 2021
May 1, 2022April 24, 2022 The Flute View 0 Comments Alberto Navarra, nielsen flute competition winner
Alberto Navarra began his studies under Maurizio Valentini at the Ghedini Conservatory in Cuneo. He later studied with Andrea Oliva at the Accademia Nazionale di Santa Cecilia in Rome. At the Queen Sofia Academy in Madrid he was a scholarship student under Jacques Zoon and was decorated as the school’s most outstanding student. Alberto is a laureate of the Severino Gazzelloni International Flute Competition (First Prize), the Dorel Baicu International Competition (First Prize) and the Carl Nielsen Flute Competition (First Prize).
Can you give us 5 career highlights?
Well, Probably the first was when I attended the E. Pahud masterclass in Turin when I was 16, I was so scared!! Then when I was selected in the Escuela Reina Sofia in the Jacque Zoon class and when the Queen Sofia of Spain gave me from her hands the prize as the most outstanding student of the flute class of the ESMRS, what a moment! Certainly, winning the Gazzelloni competition and being the first italian in 9 editions was unforgettable. The last, but not the least, the first prize in the Carl Nielsen international flute competition, that was truly amazing!!
How about 3 pivotal moments that were essential to creating the artist that you've become?
The day when I played my first piece for a audience, at that moment I discovered that I wanted to be a professional musician.
The period, after the High School, when I built my “sound” technique, It was so difficult and I thought to leave the flute but after 2-3 years of perseveranceI solved my problems and I started to enjoy the flute again. It was essential for me when I met Jacques Zoon, in the 2 years as his student I learned a lot and He inspired me to play the more musical as possible and give all myself.
What did you 5 things did you learn from competing in an international competition?
well, I don’t know if I learned something but when I have a competition I always think about these 5 "rules":
1) Just focus only on yourself, don’t think about the others competitors.
2) Be prepared
3) Play with your ideas, don’t try to play for the jury taste.
4) Don’t think that’s a competition like a race, but more like a meeting with friends.
5) Enjoy the moment! and think just before the performance that you are gonna play your best concert in your life.
What do you like best about performing?
I love playing for the audience, I always try to create a connection between me and the people who are listening to my concert. I am very happy when I can feel that I’m really transmitting my emotions to the public.
What does your schedule look like for the next 6 months?
I have a lot of projects with orchestras in Italy till august, in may I’ll go to Santo Domingo for two concerts as a soloist and I’ve planned some festivals this summer. From August I will start a new experience in the Karajan Academy where I can play in some concerts and tour with the Berliner Philarmoniker orchestra, I can’t wait!!
What inspires you the most in life?
When people do things with all their passion and try everyday to became better then the day before.
What has been your professional greatest challenge?
To enjoy every moment during the performance without thinking about technique.
What has been your personal greatest challenge?
It was hard, and probably still the same, to separate musical and “normal” life. But I tried to create other hobbies and interests and this helped me a lot.
Can you give us 5 quirky, secret, fun, (don't think too much about this) hobbies or passions?
I truly love practicing sports like: running, football, basketball, tennis …
but my “secret” hobby is fishing :)
What 3 things would you offer as advice for a young flutist?
practice a lot but not too much!
believe in your teacher and in yourself
enjoy when you’re playing, that’s the best thing in the world!