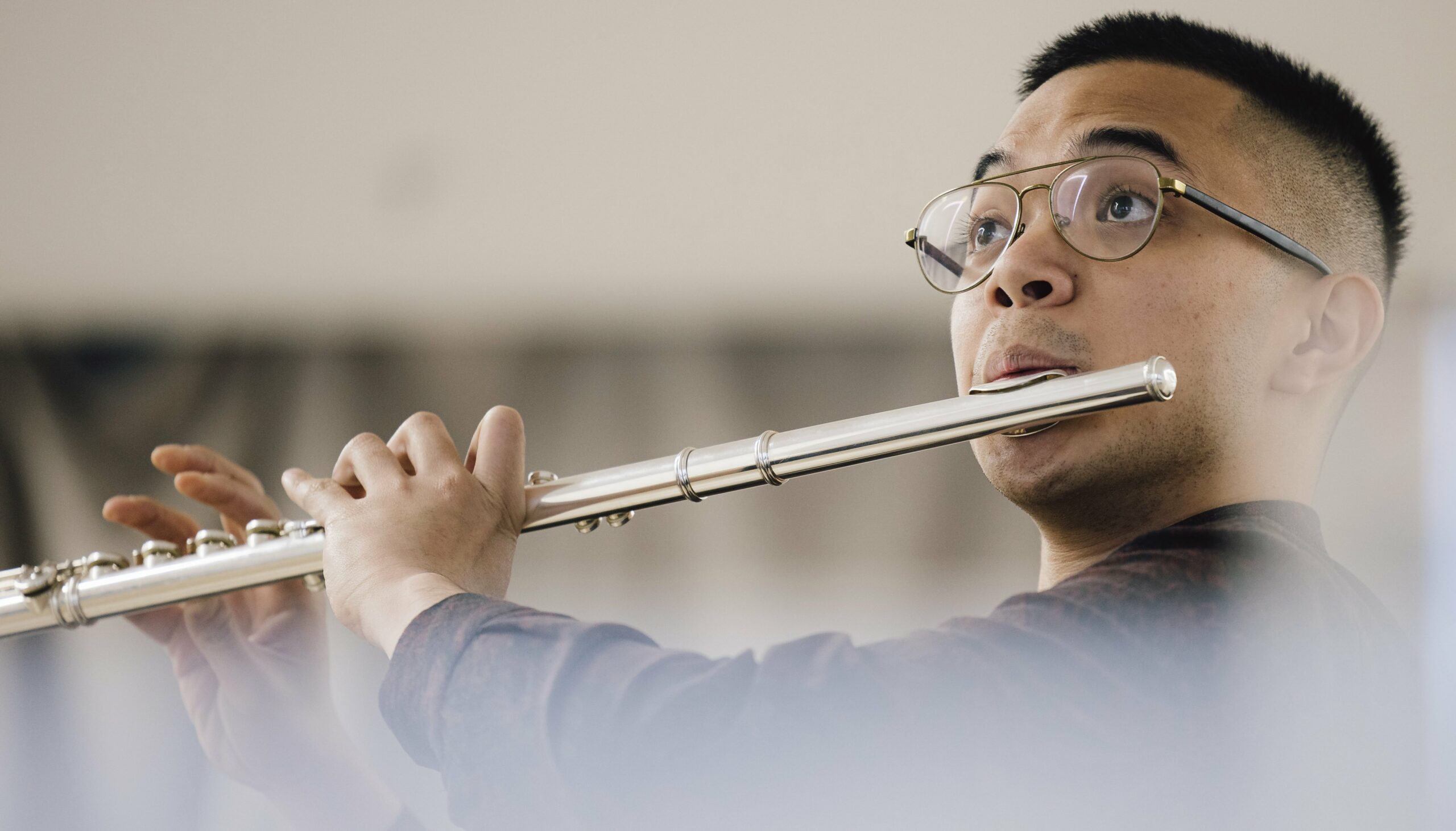 En Español Featured Interviews Issues May 2022
May 1, 2022April 29, 2022 The Flute View 0 Comments First Prize Kobe Flute Competition 2022, Rafael Adobas Bayog
Spanish-Filipino flutist RAFAEL ADOBAS BAYOG was recently awarded the 1st Prize at the Kobe International Flute Competition 2022. Acknowledged by his curiosity and freshness on stage, Rafael stands for a new generation of flutists who complement their own music-making with other art forms. Winner of the 3rd Prize and Best Interpretation of the New Piece by Thomas Larcher in the Carl Nielsen International Flute Competition 2019, Rafael has collaborated with the world’s greatest musicians and will soon perform a solo recital in New York’s Carnegie Hall.

What 5 things did you learn from competing in an international competition?

When I was a kid, every time I was on stage I noticed the people were attentive and concentrating on what I was doing. I enjoyed looking at the audience in the eyes and seeing they were sharing the journey with me. For some minutes, I was kind of a puppet master. I don’t know what it was and, nowadays, I still have the same feeling. I think it's the communication point which I like the most.

We have some fun projects at the orchestra in Stockholm and some recitals, master-classes and solo concerts are happening in Spain, Germany, Belgium - and in the US! Together with the Siemens Arts Program and my friend Veriko Tchumburidze, I will get to play a solo recital with my pianist Madoka Ueno in Carnegie Hall on June 22nd. I am really looking forward to it!

On a personal level, there are many things I would like to do! Now that are less restrictions, travel more (also without the flute and without concerts in mind), learn new recipes, spend more quality time with my family and friends, learn to speak more languages - specially Visayan, the Philippine language they speak at my dad’s region, so next time there’s a family meeting I can also laugh to their jokes. I would like to travel to the Philippines with my family.

Professionally, I’d like to aim for a balanced and rich-in-diversity music making life. Recitals and solo playing, teaching, chamber music festivals, daily orchestra playing and having time for myself for brainstorming and creating with artists from other disciplines. That would be the dream.

The actual moment. No matter what I am doing or thinking or with whom do I spend that particular moment. It could be me very concentrated in that moment or lost in my world and then coming back, and then being lost again. It could be the lazy Sunday morning I wake up in bed or the small chat I have just had with my neighbor. Each moment is unique and enjoyable in a way and will never ever be repeated.

What has been your professional greatest challenge?

To trust the process. To understand and accept I am not going to always be at my best and nor at my worst. Taking the best decisions in the practice room and still questioning them during rehearsal and even during performance. But, after all, I have to stick to my own principles. Slowly, I am learning to listen to my gut. It’s THE challenge and that’s what makes this journey thrilling.

What has been your personal greatest challenge?

To know when and how to say NO. It’s hard but I am getting better at it. Setting boundaries in every field of life in order to be at peace. At this time, my inner peace is one of the most valuable things I have. I would never sell it!

Who were your music mentors? And what did you learn from them?

It has been a long way and they will always be my mentors since I always run to them for any artistic or personal matter.

Joana Moragues and Anikó Pusztai were my mentors in Ibiza. From them I learned the basics on the flute, the standard repertoire and the love for music.

Vicens Prats teached me the meaning of discipline and how to be convinced with everything I am preparing. How to be in top shape, how to present myself on stage and how to communicate.

Nowadays, I study with Andrea Lieberknecht and she helps me to go further with my imagination and my standards. Do I have a clear picture in my head of the music? Do I sound as I really want? She helps me unfold the message between the notes: combining all the technical parameters in order to deliver my musical idea in the best possible way.

Of course, my tutors at the Royal Stockholm Philharmonic Orchestra (Andreas Alin, Anna Riikonen, Jan Bengtson) helped me week after week immensely with the orchestra playing, when to overpower, how to blend in and how to behave in a section.