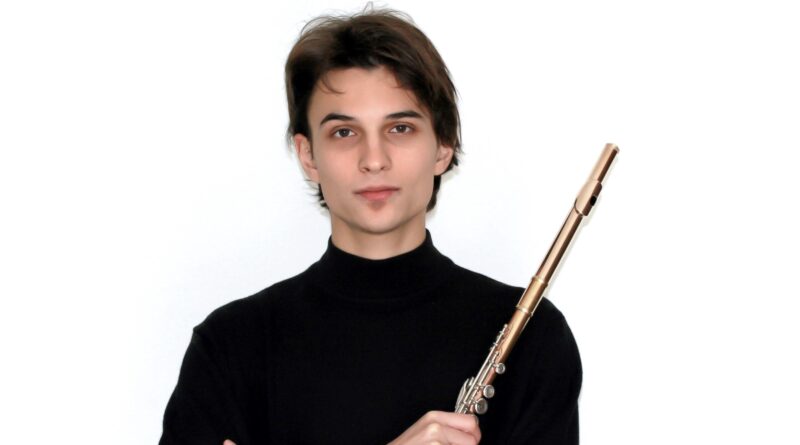 Featured Interviews Issues May 2022
May 1, 2022May 1, 2022 The Flute View 0 Comments 1st prize winner, Kobe Competition Winner, Mario Bruno
Mario Bruno (born 1997) studied with Antonio Amenduni, Michele Marasco, Davide Formisano and Andrea Lieberknecht, with whom he is still studying. Since 2005 he has enjoyed a very successful career, performing as a soloist, in chamber groups and in orchestras, and winning several important competitions, including First Prize Winner of the 10th Kobe International Flute Competition. He has played Solo Flute at the Staatsorchester Kassel since August 2021.
Can you give us 3 career highlights?
The first is actually two distinct things: being able to enter in the class of Davide Formisano in Stuttgart, and later in the class of Andrea Lieberknecht in Munich. They are both wonderful professors and amazing musicians, and I really wanted to study with them. They both shaped (or better, are still shaping) my way of playing and helped me with many musical and technical issues, and this brought me where I am now.
The second was winning a place in the orchestra. After many auditions, I won as Solo Flute in Staatsorchester Kassel, and I started to work in August; playing in the orchestra is extremely helpful in developing the sound, the musical understanding between the colleagues, the many colours that one can have on the flute, and I started to work better on these things thanks to the orchestra.
And finally, the third was winning the Kobe Competition. It is such a big competition, it is an enormous help for my future career, with concerts, masterclasses and so on.
How about 3 pivotal moments that were essential to creating the artist that you've become?
So, the first moment is a pivotal moment of which I became aware looking back at what I did, and it is having started to study flute with the right teacher. I think that most of the musician that I am today, I owe it to my first and main teacher, Antonio Amenduni. Because of him, whenever I start to practice a piece, I always ask myself "Why am I doing this thing, musically?", or "Is it right to do this thing? Is it in accordance with what is written on the score? What the composer wants to tell? How can I do it?", and I think this is the main part of the practice. Then you move the fingers.
The second moment is my re-discovery of the music of Giacinto Scelsi, and recently that of the philosophy of Carmelo Bene. I already knew Scelsi's music, superficially, but then I heard his last piece, "Un adieu", performed in Siena by Giancarlo Cardini, and it struck me. So, I started actively listening to his music and reading his books (or books about him). I find his idea of himself being a "medium" for the music similar in a way to the idea that Bene has of theater, i.e. the disappearance of the actor to let the action take place. I want to do the same thing when I'm playing: I don't want to be there and play myself, I would like to disappear and let just the music be there. I can't do it yet, but I'm trying a lot, and that is an important aspect that defines me for who I am.
The last moment is not a moment, but something that I became aware of little by little in the past years, and is the awareness that you can do whathever you like with music, as long as the piece you're playing remains consistent and coherent, and as long as what you're doing is stylistically and philologically correct and respects the music, and as long as you can justify your choices. Or, at least, this is what I believe.
What did you 4 things did you learn from competing in an international competition?
One really important thing that I learned at my expense is that you must perfectly know the score of the pieces you play. Every note, articulation, dynamic, not only in the flute part, but most importantly in the piano or orchestral part. That's the starting point to make chamber music, and not flute music with piano accompaniment. On a sidenote, check different editions of the same piece and, when available, the first edition and the manuscript of the composer!
The second thing is linked to what I was saying before about making chamber music, and it is to open your ears. Listen to what the piano or the orchestra are doing, give them space when they need it, take your space when you need it, and most importantly, react to whatever could happen in concert, musically speaking.
The third thing is to choose wisely the program. Don't play pieces that you don't like (unless they're mandatory), and if you have to play more pieces in one round, choose an order that allows you to play everything in the best way.
And finally, always ask feedbacks to the jury, even if you win. I think is important to know if what you wanted to communicate was received as you thought it would, or something different was perceived, if it was liked or not and why.
What do you like best about performing?

Something that I still have to experience: to be able to play the music exactly how I have it in my mind, how I want it. It never happened until now, but if and when it will happen, it will be the best thing for me.
What does your schedule look like for the next 6 months?
Mainly I will be here in Kassel playing in the orchestra, we have two symphonic concerts coming up, a few operas, a dance program and two new commissioned pieces. I am invited to play as temporary substitute in other orchestras, then in August and in October I will be playing in two flute festivals in Italy. And if I will get invited in the ARD Competition, I'll practice a lot this summer, and I'll be there in September.
What are your goals personally? Professionally?
Personally, I would like in the future to start to study composition, orchestral conducting, and baroque/classical flute. Professionally I would like to keep playing in the orchestra, playing chamber music and solo recitals.
What has been your professional greatest challenge?
What has been your personal greatest challenge?
Both of these challenges are one, still to be overcome, and the challenge is to be able to play exactly how I want, to play exactly the music how I have it in my head and be satisfied with it.
What inspires you the most in life?
It sounds like a cliche, but art in all the forms and at its best.
Who were your music mentors? and what did you learn from them?
I can't say to have a proper "mentor". If we are speaking about people that I know personally and trust musically, I would say my first teacher, Antonio Amenduni, and Patrick Gallois, with whom I studied for 3 years at the summer courses in the Accademia Chigiana in Italy. As I said before, from Amenduni I learned to carefully read the musical text, and to always ask myself what should I do musically, and why. From Gallois I learned to be totally free and musical, but always justifying all the choices, especially in baroque and classical music; so, reading the methods and treatises written in that period, learning about the period performance practice, and applying it when it is possible, and when it serves the music. Speaking instead of like general inspirations, then there's many more, not only flutists and not only musicians. In this case, speaking only about flutists, I would add Emmanuel Pahud and Sébastian Jacot.
Can you give us 5 quirky, secret, fun, (don't think too much about this) hobbies or passions?
I don't have any special hobby. I like reading a lot, watch movies, I listen to a lot of music (not only flute, not only classical), sometimes I play video games, and when I have time, I like to cook (and to eat good food!)
What 3 things would you offer as advice for a young flutist?

1: Do not vibrate in the baroque repertoire (or, at least, do it very moderately and with taste)
2: You're playing the flute, so think about the flute, not about singing, or how the violin sounds, or cello, or piano etc.; or, better, you can think of any instrument that you want, but only if it helps with some phrasing and it serves the music. There's no use in thinking always only about the violin or a singer (like I heard many times).
3: Don't practice too much, practice the right time but well, and after do something else and rest your mind.