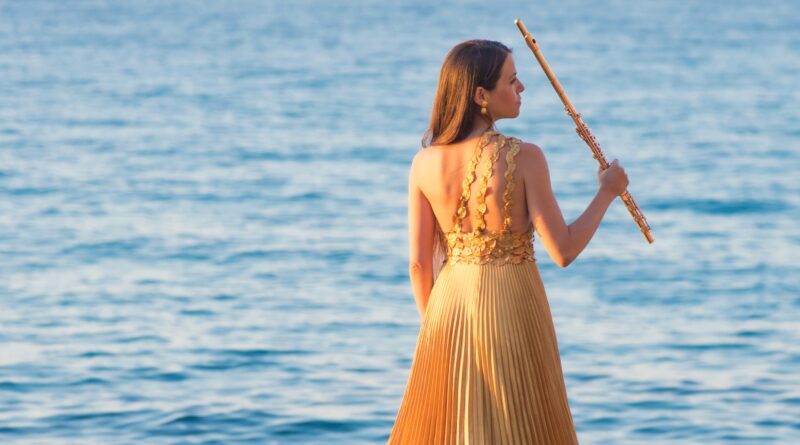 How has the pandemic affected your career?

The pandemic arrived in a moment of changes  in my career. I was principal flute of the Tianjin Symphony Orchestra in China playing my last season with them (the decision had nothing to do with the pandemic, I just wanted to go back to Europe after working four years in Asia). When the lockdown in China started, I was in Barcelona as I had some concerts happening there. And afterwards, the rest of the world went into lockdown so I was never able to go back to Tianjin and finish the season with them.

It was very complicated to come back in Europe at that moment, since everything was closed, concerts and auditions cancelled, so all of a sudden I found myself back home but no one knew it as I had no performances or chances to spread the word. Luckily, step by step, I was able to start performing again and have more opportunities in my country.

I’m used to a busy schedule and I’m an active person, so I had to find alternatives: I used that time to pursue a Master in Musical Research (I always wanted to do that Master focused on Musicology but never found time and there were several universities which allowed to do all the lessons online). I also built my own webpage and organized concerts online for my friends and family to keep me busy everyday learning new pieces. But for sure, the thing that gave me hope everyday was to start learning the new repertoire for the CD recording which was scheduled in September 2020.

Crazy!! But I look much forward to it. This summer I will be playing in several Music Festivals in Spain; I am so excited to join actress Monica Bellucci on a Tom Volf production called “Maria Callas: letters et memoires” where she will be reading letters and diaries from the well-known singer alternated with music from operas (Casta Diva is on the menu!!). In Europe next stops will be August 22nd in Neuchâtel (Switzerland) and September 10th in Rome (Italy), where I will be presenting the CD together with Albert Guinovart, pianist. Also in September I will be travelling to Toronto (Canada) for a Masterclass and concert at the Royal College of Music and 2023 will start with my debut at the Taipei National Theater and Concert Hall (Taiwan). As soloist I’m looking forward to join my beloved former orchestra, GIO Symphonia, to play the Brandenburg Concerto No. 5 in October, and in March 2023 I will perform the Khachaturian Flute Concerto with Orchestra Simfònica Sant Cugat.

But...besides this schedule, next September I’ll officially start a new job as Assistant Principal Flute of the Orquestra Simfònica del Vallès, after a successful trial last season. This position arrives in the perfect moment of my life: I will be back home after more than 10 years studying and working abroad. Plus, the Orchestra performs regularly at Palau de la Música Catalana, one of the most beautiful venues in Barcelona. I feel grateful and I can’t wait to join the orchestra and give my best.

Personally, to be in peace. Over the past years, specially during pandemic and after, I realised I was always living under stress and unhappy. And that stress became a routine which didn’t allow me to enjoy some moments of life (and some of those won’t happen again). I must admit 2021 was not my year, and 2022 started worse. But yet I didn’t give up and tried to solve things one by one until I finally found an inner calm. And my goal is to keep this balance in order to perform at my best.

Professionally, I don’t want to relax: although I am enjoying this great moment of releasing my latest album with Sony Classical and having a position in an orchestra, I don’t want to see this as the result of work done in the past years or the arrival of a marathon. For me means a new chapter in my life which needs a lot of work as is just the beginning of what will happen next. In other words, I need to work harder to keep the level up. Humble people, they tend to be the greatest. Their work is constant, they don’t show it or are proud of it, they just work and keep working. And when something good happens to them, they don’t fantasize but keep working harder than before. They never tell how many hours are behind their work because it’s countless, or how many bad experiences they went through, they just do their best everyday without expecting something in return. Most of the greatest musicians I’ve met respond to this pattern. And I found it admirable and a role model.

And talking more specifically about the flute, of course there’s one person who has been an inspiration all over my career: Sir James Galway. What I could never imagine back as a young flutist is that he and Lady Galway would become part of my life in a very special way: they were always there during my last years as a student and during my first years as a professional flute player. I know I’m a very lucky person for that, and I will always be grateful to them for having helped me become the flutist I am today.

Let me share two, one personal and one professional. First one was to quit the orchestra in China: I had a good position and a good salary, and it was hard to leave this security and go back home without any job and having to go back to do auditions after many years out of them. I thought a lot about it as I had my doubts, I even talked with some of my most important teachers, but finally found the strength to make the decision. Now I’m glad I did it.

Professionally, my greatest challenge until now has been to play the Mendelssohn Concerto with a broken mole. Since I have a small jaw, one wisdom tooth couldn’t grow properly and broke one week before the concert. Half of it could be removed but the other half remained and could be only removed by surgery as it was touching the nerve and a bad extraction could cause me a mobility loss in the jaw. I survived the two concerts with painkillers and medication, and the day after I had the surgery, which went well.

It might seem strange, but, after over ten years living abroad, the idea of finally settling in my homeland, near my family and friends, speaking my language everyday and having a new musical family from September on with an amazing season ahead (Dvorak’s New World Symphony, Tchaikovsky’s Piano Concerto, 6th Symphony and Nutcracker, Ravel’s Bolero, Mozart’s Don Giovanni, Verdi’s Trovatore, Puccini’s Madame Butterfly amongst others) is super exciting!! The other day on the phone with my dad, he told me he was checking the season ticket for the orchestra at Palau de la Musica and I couldn’t avoid smiling; how many times they had travelled wherever I was to come to one of my concerts! And to see his happiness talking about all the concerts and programs they wanted to attend next season, fills me with joy and so much happiness, that some of it escapes from the eyes in form of tears.

Seeing how the world is becoming totally addicted to the phone, including myself. I remember when I was young, when taking the train every day to go to University, everyone on the train was reading newspapers, books, someone would even be drawing…I found it amusing, sometimes I would even ask if the novel was interesting. I remember reading all the Lord of the Rings, Harry Potter, the Dark Materials before any movie was out and it was so exciting to imagine all the characters on your mind and spend hours reading. Nowadays you hardly see someone reading a book on the train, including myself again, we’re all on our phones without even looking who is sitting in front of us, not even doing the effort to say good morning. I feel the big improvements in communications are making us communicate less and less.

Preparing the upcoming concerts of this summer (11 in total between July and beginning  September), organizing next season of the orchestra with my colleagues, finding any moment to escape to Palamós to get lost under the sea…and educating a flurry ball of four legs and almost five months named Dana. She was abandoned when she was born and my family went to a shelter to adopt her. Although she is a very active dog and sometimes bring my patience to the limits, I have to admit she is adorable and has a very sweet temper. Animals are more human that some persons.

Bitting my nails. Since a child I’ve been doing it, and although I know how disgusting it is and how terrible hands looks…I can’t control it.

Time travel. I would love to see ancient cultures, Egypt at the time of the pharaons, Greece when the Acropolis was built, Jordan and the temple of Petra. To listen to Taffanel, Gaubert, Moyse, Rachmaninov, Sarasate, Casals,  Callas, Caruso, di Stefano and other great artists  not from a recording but from real. To see how Da Vinci painted, how Martin Luther King had a dream or how Audrey Hepburn was on the set for War and Peace.

That life happens just once and you have to enjoy it. When I was that age I felt there was plenty of time ahead and that there would be time for everything. Now, seeing it from the mature side, I see moments I was so worried or sad which weren’t worth it.

What is your Spirit Animal?

I choose the Horse as my spirit animal as it resembles a balance between the instinctive and tamed part of my personality;  strong emotions and passionate, with a driving force that carries me in life.