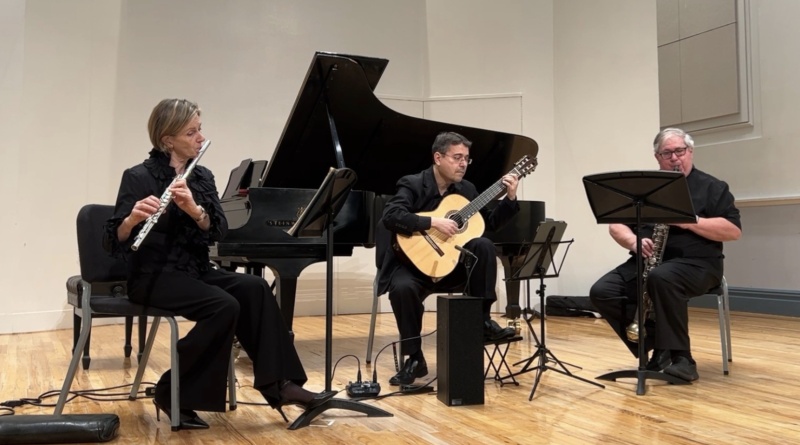 Kathleen Nester is Assistant Principal Flute/Piccolo of the New Jersey Symphony. Also a member of Orchestra Lumos in Stamford, CT, she is in demand as a freelancer in NYC and has performed with such ensembles as the Orchestra of St. Luke’s, American Ballet Theater and the New York Philharmonic. She originated the flute book for An American in Paris and has performed in many Broadway Theater productions as well as recorded with a wide range of artists, including Joshua Bell, Ute Lemper and Sting. Kathleen can be heard on major motion picture soundtracks, including Julie & Julia, Joker, and Tick Tick Boom. A certified Suzuki flute and Suzuki Recorder teacher, Kathleen coaches flute and composition for the Youth Orchestra of the New Jersey Symphony and is on the adjunct faculty at NYU.

"The CENTER CHAMBER album is a wonderful collection of chamber music by living composers performed by New York area musicians. The concept is fresh and the sounds are glorious. Paul Cohen's sax lines are mellifluous with a rich and voloptuous sound. Flutist, Kathleen Nestor adds elegant sonorities in the high registers. Each piece features a unique instrumental presentation providing the listener with a cornucopia of sonic resonances." How did the concept evolve?
It was Paul’s idea, and Allison’s. The ideas evolved through our rehearsals, which were during the pandemic. We took many precautions for our safety, including positioning our stands at least 6 feet apart and daily testing, and perhaps this extra challenge helped us be even more attuned to how the adaptations would work best for each individual instrument and instrumentalist.

Can you tell us about the recording experience?
Once the adaptations were set, the recording was straight-forward. We knew what we wanted for the final product and focussed on getting the sound and balance we wanted in the recording.

What did you like best about your participation?
Paul and Allison are wonderful musicians and colleagues. We collaborated well together, experimenting to find the best arrangement for the ensemble, trying different octaves, articulations, dynamics, etc. There were many lively discussions and much experimentation. It was a fun and rewarding experience.

How did the concept for this album evolve?

Center Chamber is the culmination of interests and projects spanning many years.

1. I’ve always wanted to expand the awareness of the beauty of the saxophone as a concert instrument. I also wanted to introduce lesser-known but superb music to the saxophone community. The mix of pieces - some new some old, some original and transcribed - create this balance for a musical experience that everyone can appreciate, and hopefully enjoy.

2. The Connosax is a rare and unique instrument whose musical potential has yet to be explored I’ve been concertizing on the instrument for years in both both chamber and solo settings. Center Chamber is the first opportunity, (with more to come), to introduce the Connosax on commercial recordings.

3. Playing with Kathleen and Allison in our group We are Trio! is such a great experience that it was only natural to include them on Center Chamber. Their playing (along with Anna Keiserman, Mark Timmerman and Oren Feder) elevates the music-making to an unparalleled level of artistry and musicianship.

Can you tell us about the recording experience?

As with most recording projects with professional colleagues, it was a combination of great joy, arduous, highly critical work with intense focus and concentration. But that was followed by a spirit of celebration (and relief) when our producer signaled that we were done; everything was covered.

The process of recording is liberating but also pressured and uncompromising. Yes, we get second chances (and more!) but the ultimate standards of our playing have to be impeccable and consistent for the entire session. In live performances we don’t look back, but in recording we look backward and forward at the same time, as everything is reviewed under an aural microscope.

I love the diversity of music, the exploration of the different saxophones, and the extraordinary playing of my colleagues! It is beyond amazing to play with musicians of this artistic caliber.