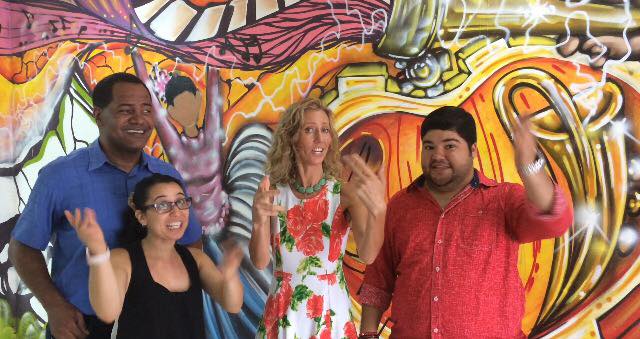 Fluterscooter was a Guest Artist of their first flute festival this summer in Panama City.  In this interview, she asks them about the festival, starting a flute association in Central America, and the flute and music scene in Panama.

Explain a little about your background and how you founded APAFLUT:

Dafne: When I was studying in the USA, I saw a video of kids holding guns. The kids were barely 6 or 7 years old, and they were talking about killing people. These kids were reflecting all the hate that the older people had against society, and it was reflecting how hate can be passed down. I was thinking how sad it was for me, and that the government is not helping too much. They care about other things instead of education and culture. I used to live in one of these areas, so I know where these kids come from and what they see everyday. I said, we don’t need to wait for the government to do something; we have something beautiful. Let us use it, and take advantage of what we know, and all we know is to play the flute. We don’t have money. Manuel is also very enthusiastic, so we called and organized 40 kids and paid for pizza. One kid said he wanted to quit school, but saw what we were doing and your story, and now he will graduate and be someone. The kids said that we are their idols. After the first Panama flute “mini-festival,” we decided to create APA Flut.

It’s been 113 years since anything happened with the flute here. We are the new generation. We need this!

Without any money, I went back home and talked to Prof. Almarza, and he said he would support it. I went back to UNLV, and Dr. Grim was also on board. After that, I had a lot of opportunities to write projects for fellowships, and I won one fellowship through UNLV. I’d also write to friends of flute foundations and explain about the project, and I got a lot of support.

Manuel: My sister is a lawyer, and she helped us with all the legal things we needed to create APA Flut in Panama.

Manuel: It was VERY difficult, especially since we don’t have money, but luckily my sister helped.

Valentin: We did 4 recitals to earn money to pay for the creation of the association.

Dafne: We owe everything to the kids. Ever since we gave them the idea that we’re starting the flute association here, they knew we didn’t have money, but they said they still have flutes. From January until last week, the kids have been presenting recitals to get money. We sold tickets to the recitals, and advertised mostly on Facebook.

Is this an ongoing flute association? What are your responsibilities until the next festival?

Dafne: Besides getting sponsors, it is to keep the kids motivated. We don’t want to give them something beautiful like this, but then have it go away. I want these kids to be someone and be inspired.

So you’re really empowering these kids.

What are the ages of the kids?

Dafne: The kids are 12-21 years old, middle school through college.

Manuel: We have 1 kid here from a very dangerous place called Colon. He is doing his best to finish his flute career, because he doesn’t have the resources to complete it or own his own flute right now.

Dafne: None of the kids have their own flute right now. They use the flutes from the school band program, but they still work.

Do the students take privately, or is it mostly through band?

Dafne: It’s mostly through band, so they learn by themselves. Valentin teaches them, also Rommel Charpentier.

Explain the role of Eduardo Charpentier in the Panamanian flute world.

Dafne: He taught us all in Panama. This festival is honoring Dr. Eduardo Charpentier del Castro. He’s 90 years old, and I was his last student. He has several brothers, and his youngest brother was a student of his, and we are students of his brother also. That is the flute lineage in Panama.

There is one symphony orchestra in Panama City, correct? Besides that, is Panama more focused on concert bands?

Do you see any more orchestras or chamber music groups forming?

Dafne: Right now, the National Institute of Culture is trying to build an orchestra, and they are also working with kids who come from lower income places.

This is a movement, and we’re happy to be a part of it!

I think it has to do with the fact that there’s a new generation. There are people like me, who have gone outside the country and have seen how things work, and we really dream that for us. We understand that the only way we can help our country is throughout education and the arts, and flutes.

Are you looking for sponsors? What is your ideal sponsorship?

Dafne: Yes. An ideal sponsor would be someone who stays with us from Day 1. The most urgent things we require now are the flutes, especially low flutes. We don’t care about what brand, as long as the kids can play them. Latin American Music Workshop is excited to work with us and do maintenance on the flutes, so we already have a company willing to help us; we just need the flutes, and that is what we are trying to do right now.

Do you expect more students next year?

Dafne: YES! This year, we were actually expecting two 17 year old kids from Venezuela, and unfortunately the political situation in Venezuela is very difficult. They confiscated their passports as soon as he got to the airport. The authorities sent the kids back home, even with official invitiation letters. It was sad because they had a dream to come to the festival.

Manuel: You know the situation in Venezuela, so it was a great effort to buy the tickets, and they didn’t get their money back. Next year, somehow, we will bring them here. They need to be here.

Do you see more countries coming to this in the future? Which ones?

Dafne: The countries where they do not have the opportunity to experience things like this, especially Honduras, which is here. These kids are amazing, and they live in the middle of the gangs and the ghetto. Jessie Godoy was able to find sponsorships for most of them, and they’re here and so amazed with everything.

All the kids are so enthusiastic, and that is our motivation to keep going!

Manuel: Next year is only going to be bigger and better!

Please visit APAFLUT to learn more about the festival and association, and to make a donation.

Dafne Guevara began her musical studies in Panama at the Youth Plan of Music under the tutelage of professor Rommel Charpentier. Later, she became a member of the Elementary Orchestra of the Youth Plan of Music, known today as Children ́s Symphony Orchestra of Panama, as well as the Isthmian Youth Orchestra. Ms. Guevara has also been involved in the music camps conducted by the National Concert Association and has played with the Youth Philharmonic Orchestra of the New England Conservatory, as well as the Quintet Vivace, the Symphony Orchestra and Band of the National Institute of Music of Panama (Conservatory), Ms. Guevara has performed at the Panamanian Double Reeds Festival, the International Flute Festival organized by the Costa Rican Flute Association (ACOFLA), the Crescendo Summer Institute in Sharoshpatak (2012) and in Tokaj (2015), Hungary, Domaine Forget in 2015 in Quebec, Canada, and the Consummate Flutist in Pittsburgh.

Professionally, Ms. Guevara worked as flute player in the Symphonic Band of the Municipality of Panama and as piccolo player of the National Symphonic Orchestra of Panama. Additionally, she has participated in staging operas with the Italian-Costa Rican Company of Opera Rienza, the Company of Opera Panama, as well as Broadway musicals.

In 2010, Ms. Guevara was selected as a Fulbright Student for the year 2011-2013. With this scholarship, she was able to receive her Masters in Flute Performance at UNCSA under Dr. Tadeu Coelho. In 2014, she also finished her Professional Arts Certificate at UNCSA. In fall 2014, Ms. Guevara began a DMA program in Flute Performance at University of Nevada, Las Vegas (UNLV) under Jennifer Grim. At UNLV, Ms. Guevara is a Graduate Assistant and she conducts the UNLV Flute Ensemble.

Manuel has a Bachelor's degree in Fine Arts with specialization in Musical Instrument: Flute from the University of Panamá. In this University, his instructors were Eliette Apolayo and professor Valentin Martínez. At the same time Mr. Ruiz was studying at the Youth Music School under Maestro Rommel Charpentier.

As an educator, Manuel has worked as flute teacher at the Camps of the National Association of Concert, The Instituto Episcopal San Cristobal, Alberto Einstein Institute, and in various camps and programs of the National Institute of Culture’s Orchestra.

Valentín Martínez Lasso began his music studies at the Music Band of the Elena Ch. De Pinate School under the tutelage of professor Elionett Reyez Pertúz. Mr. Martínez has a Bachelor in Fine Arts degree with specialization in Musical Instrument (Flute) from the School of Music of the University of Panamá, a title that he obtained under Eduardo Charpentier De Castro. Mr. Martínez also has a Bachelor of Music with specialization in Flute from the National Institute of Music of Panamá (The Conservatory of Music) under both Gary Lewis and Rommel Charpentier. Valentín also has a Masters in Music and a PhD in Teaching (Education).

Martínez has been awarded the prize to the excellence by the Gnéssinij Academy and is honorary member of Cultural Affairs at the City Hall and Moscow’s Government, Russia.

Currently, Dr. Martínez works as a Flute Professor at the Fine Arts School of the University of Panamá and at the National Institute of Culture. Valentín is a member of the board of the Panamanian Flute Association (APAFLUT) and organized, along with Dafne Guevara and Manuel Ruiz, the 1st Panamanian International Flute Festival “Dr. Eduardo Charpentier De Castro."