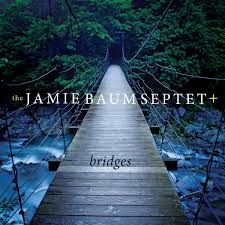 Jazz flutist, composer and leader Jamie Baum has released her new CD Bridges.  Bridges became the focus of her 2014 Guggenheim Fellowship application (and subsequent award) while Jamie was researching the connections between Jewish music (her earliest influences) and Arabic, Middle Eastern and South Asian music. As Jamie says “this music represents a bridge highlighting the similarities found in diverse religious musical traditions that connects us… Bridges feels more compelling and relevant today then I could have anticipated.”

I’m so excited by the concept and realization of these ideas and Baum really makes a compelling, creative and musical case for these connections.

Here are the tracks:

From the Well- based on a scale common to Maqam, Jewish and South Asian music.

Song Without Words (for S. James Baum) written for the passing of Jamie’s father and based on Kol Nidre which is the ancient melody played at the beginning of Yom Kippur (the Jewish day of atonement).

There Are No Words- expressing how there are no words in the face of loss.

Honoring Nepal: The Shiva Suite – commissioned by the Rubin Museum of Himalayan Art in NYC, and written to highlight and pay tribute to the 2015 earthquake in Nepal. Using Shiva the Hindu deity who is the “destroyer of evil and the transformer” as the inspiration for the suite.

Joyful Lament, based on a melody by Nusrat Fateh Ali Kahn

Mantra, based on Mahamrityunjaya Mantra, sung for healing, rejuvenation and nurturance.

Ucross Me- about crossing boundaries.

As you read and listen to the track titles you begin to understand the thoughts, story and hope that Baum is telling us through these complex compositions, which combine improvisatory jazz, Hindu, Arabic, Jewish, Classical and Minimalist forms into a beautiful whole! Throughout the album the playing is stellar, the ensemble is perfect and each artist contributes exquisitely to the musical message of the album.