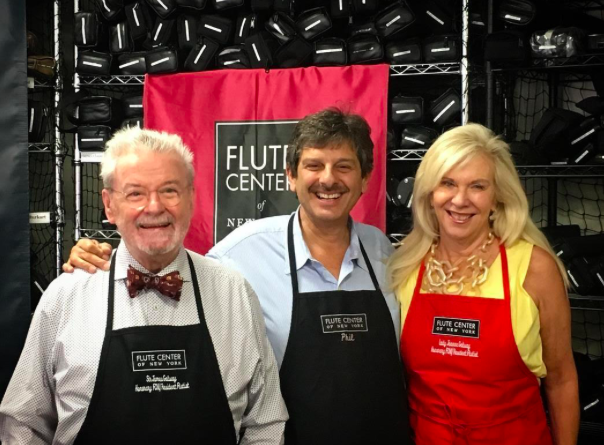 As a lifelong New Yorker I tend to take all the amazing cultural offerings here for granted, you know, feeling that I can always attend a concert, go to the museum, find something interesting… so I often don’t go!

Several weekends ago I found myself free, in town and thought – I really want to attend some concerts.   I wondered if there were flute concerts to hear and see- maybe I could get inspired, hear a new piece and learn something new.  Happily there were a number of events that fit the bill! Here’s what I experienced over 3 days.

On Saturday, Symphony Space (one of our many interesting venues, reclaimed from an old movie theater on the Upper West Side of Manhattan) was holding one of their Wall-to –Wall days of performances of a significant composer. This year was Wall-to-Wall Bernstein.  I couldn’t wait to hear one of my favorite composers played by many of the cities finest musicians. The concert was stretching a good 11 hours so I planned to attend the afternoon segments that focused on Bernstein’s classical music. I was especially interested in hearing a performance of Bernstein’s Halil: Nocturne (1981) played by Mindy Kaufman who is the amazing Piccolo player with the NY Philharmonic. The version that was played is the 1987 version for flute, piano and percussion and the marvelous players in addition to Mindy were Eric Huebner (pianist with the NY Phil), Daniel Druckman (NY Phil) Pablo Rieppi (NYC Ballet Orchestra) and Sae Hashimoto all on percussion.

Here is what Leonard Bernstein says about Halil in the score:

“This work is dedicated ‘To the spirit of Yadin and to his fallen brothers…
Ḥalil (the Hebrew word for ‘flute’) is formally unlike any other work I have written, but is like much of my music in its struggle between tonal and non-tonal forces. In this case, I sense that struggle as involving wars and the threat of wars, the overwhelming desire to live, and the consolations of art, love and the hope for peace. It is a kind of night-music, which, from its opening 12-tone row to its ambiguously diatonic final cadence, is an ongoing conflict of nocturnal images: wish-dreams, nightmares, repose, sleeplessness, night-terrors and sleep itself, Death’s twin brother. I never knew Yadin Tannenbaum, but I know his spirit.’”

Mindy’s flute playing was beautiful, exacting in all facets, rhythm, pitch, sound and emotion, and the other players were equally excellent, I loved hearing all those percussion sounds with flute, it’s such a great combination.

The concert was inspiring in several ways, reminding me of how interesting it is as a flutist to play with percussion, and to think about precision as a player in all its aspects. And, given the difficult times we’re living in to remember how music can represent our struggles and conflicts in a way that is non-threatening to those who disagree or oppose us, can instead be healing and consoling and remind us of our shared humanity.  So Saturday was goood!!!

On Sunday my friend Stephen Clark was in town from London to perform a short recital as one of the winners of the Alexander & Buono International Flute Competition. They have a flute competition once every 3 years and give the winners a concert at Weill Recital Hall at Carnegie Hall.

Stephen Clark played a wonderful program with some pieces that I don’t know! I spent many years performing and commissioning new music, but then I changed direction to bring music to children (and others) and have been out of the new music loop. I’m missing learning and performing new, fresh off the press pieces, so I’ve begun paying attention again to new work. The works that Stephen performed are, Earth, by Takatsugu Murumatsu (b.1978) and Bali Moods No.1 by Anne Boyd (b.1946). Murumatsu is well known as a film composer but he’s also written Earth for flute and piano. It’s a beautiful, melodic piece (I can still hum the melody) and would work well on a recital if you wanted to balance something tricky and abstract with a 21st century piece that is easy on the ears! Here it: https://www.youtube.com/watch?v=f08q5I0lMpc

The other work on the program that I didn’t know, Bali Moods No. 1 is a beautiful piece inspired by Gamelan music. Australian composer Anne Boyd may not be well known to me, but she is very well known in Australia where she has been professor at the University of Sydney for many years. Bali Moods No. 1 is colorful, bright and evocative of the energy of Bali. To evoke the Gamelan it even uses flute sounds to vibrate the strings of the piano and give us ever more overtones and color! You can hear the piece here: https://www.youtube.com/watch?v=5mnvacI-JLU

Stephen plays beautifully with excitement and connection with every note he plays, so I found his playing inspiring as well!  A reminder to myself to always work on being with the audience, that this quality is almost the most important aspect of playing, so thank you Stephen.

On Monday (OK I know it’s not the weekend anymore) I attended Sir James Galway’s Master Class at The Flute Center of NY! The Flute Center has been hosting a Salon Series featuring concerts and classes by some of the flute world’s most exciting players and professors. The latest event was a 3 hour master class by non-other than flute icon and treasure Sir James Galway. 4 flutists had the opportunity to work with Sir James for 30 minutes at a time! I heard 3 of them, Julian Rose, Giorgio Consolati and Jessica Valiente. Over many years I’ve had the opportunity to attend master classes with Sir James and I’ve learned a lot from him that I use every day in my flute practice and performance. Over 30 years ago I’ve heard him discuss his method of practicing, how he maintains his amazing technique through a series of scales, long tones, tone development and more. Early on I adapted his approach and it’s a brilliant way to maintain and build my technique. Every time I attend another class I come away with what I think of as another “golden nugget” of learning. This time while he was teaching Giorgio Consolati a very talented, musical and exciting player, I received this classes “golden nugget!”

Consolati was playing the Mozart D Major Concerto almost flawlessly, but then he missed a small section. Not a big deal as it was a great performance, but Sir James had this to say: (I’m paraphrasing) “If you missed some notes it’s because you didn’t practice that section enough! You need to spend more time than you think to make sure that you really know the music.” It was a great teaching for me as I was getting ready for a small concerto appearance and felt that I knew the music very well, (all memorized etc.) but in practice sometimes something faltered. After the class I spent much more time on some of the parts that were a little harder and re- thought my commitment to practicing. Sir James practices all the time!!  So on Monday I learned something new and also became re-inspired in my practicing. Thank you, Sir James and thank you Flute Center of NY.

New York City is a place to learn, play and be inspired (and eat great food), and endless adventure in music if you are so inclined. And I’m still chewing on everything I learned in just 3 days!!