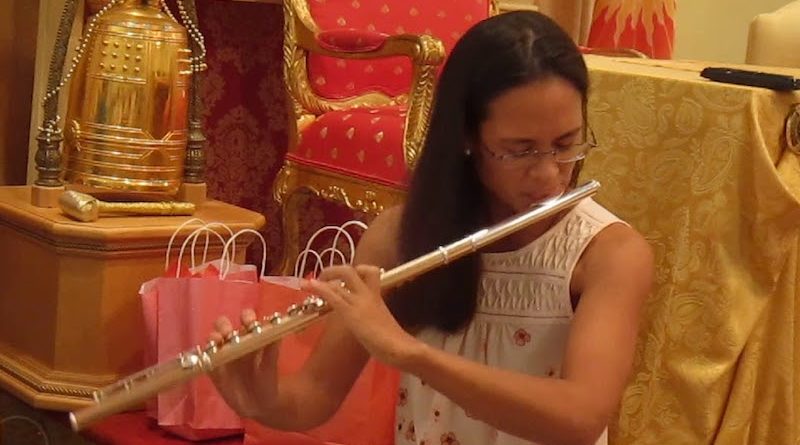 Karen Aoki has an interesting musical journey.  Growing up in Tokyo and attending the Interlochen Arts Academy at age 15, she went on to study at the Eastman School of Music as a student of Bonita Boyd.  Currently, Aoki is Assistant Professor of Maharishi Vedic Science and Sanskrit at Maharishi University of Management in Fairfield, Iowa, where she completed her doctorate in Maharishi Vedic Science and also studied Indian bansuri flute.  Through my recent studies of Transcendental Meditation (TM) in Fairfield, I was introduced to Karen through my TM instructor since it is rare to have two classically trained flutists who practice TM in Iowa!

When Karen was a child, she considered music "an access to [her] soul, as spiritual as it was musical." Getting into conservatory, it was difficult to establish a connection to the spiritual or soul part of herself, and she sensed as she had lost something and panicked because there was no longer a clear vision (like many of us, Karen had one dream to play in an orchestra).  From that point on, in her sophomore year, she became interested in one part of her entire flute practice, which was her warm up tones.  When the halls emptied out on the weekends, she opened the doors to get resonance and would just be engrossed in her warm up routine.  Taking the long tone Taffanel and Gaubert warmups, eyes shut, she tapped into a meditative process with the tones.  Questions then began to arise, such as "where does the sound come from?" and  "at what point is it no longer sound and something else?"  The pieces she gravitated toward were very simple pieces like Bach's Sonatas.  The Transcendental Meditation technique was appealing, because it was taking that sound to guide the mind into other states, "a connection with your fundamental self" as Maharishi Mahesh Yogi (founder of the TM technique) describes.

Karen then moved to Fairfield and started studying the science of meditation (Vedic Science) at Maharishi University of Management (MUM) after graduating from Eastman and didn't practice flute for many years.  She only practiced meditation but with the same dedication as she had put into music.  The classically trained habits were still there, so it was easy for her to practice meditation many hours a day.  Karen's specialized technique is called Recitation.  Recitation (of Sanskrit texts) is really what brought her whole world together.  Pronunciation and sound value is emphasized in recitation, and Karen spent four years researching it at MUM.  Already with her background in music, sound production, and a good ear, she could start at a much higher level than any student starting this technique.

Explaining transcendence, as a TM teacher, Karen explains that it is a state of mind when thoughts are very quiet and you don't have the normal distraction of the static in your mind.  Using sound is the most universally acceptable and easiest way to quiet the mind.  In the TM technique, Maharishi described the mantra as a vehicle, a way for the mind to increase subtler levels of experience and perception until you transcend even the technique yourself.  At the moment when the mantra disappears and there is complete silence of the mind, that is what is referred to as transcendence.  That state is where you get the really big ideas, clear thinking, the ability to maintain abstract thought, etc...using the technique to quiet mind puts you in a state of stillness and pure awareness.  Music does have the ability to transport, but it is not as methodical as reciting a mantra.  As musicians, we are already familiar with sound creating different states of experience, but TM is specifically about moving beyond sound altogether and experiencing silence.

"When someone is performing, it's their state of consciousness that you're tuning into, and the instrument is just a means by which the soundwaves travel," Aoki says.  I then asked what would be a good practice for flutists, not necessarily TM, to access those other states of consciousness.  Just by knowing that sound is a wonderful way to relax the mind, find certain pieces that speak to way in a more spiritual way, and start there.   While Karen is moved by early church music and Tibetan chant, she follows those leads to access that transcendental state.

Karen has meditated up to 6 or 7 hours per day, just like flute practice, but now her techniques consist of mostly reciting Sanskrit and her usual TM practice (20 minutes twice a day).  She has even practiced Yogic Flying and other advanced TM techniques.  As a Sanskrit teacher as MUM, she recited texts for 3-4 hours a day, for about 3 years, and recorded her experiences everyday.  When you just enliven the sounds (which have no meaning), they start to create alertness, and liven different systems throughout the body.  Much like classical training, her time practicing text recitation was similar to flute practice.  She had enlightening experiences which did different things to her nervous system, but some of the texts took her to levels of perception that were outside of this world and extremely peaceful, while others gave her restored energy.  With her dissertation, she looked at patterns in her experiences and compared to Vedic Science texts.  She became aware of her physiology much more.  In her teachings, she teaches how to speak Sanskrit text to both undergraduate and graduate students.  Aoki's final thoughts of our interview: "even if you don't have a musical background, the Sanskrit texts are an access point to those higher state experiences we do have with music."