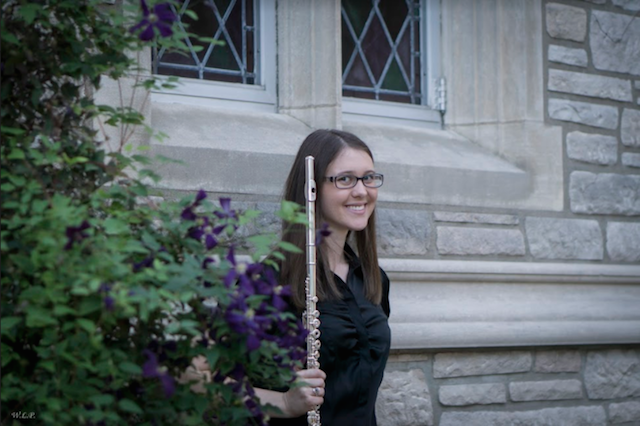 So this topic stirred up quite a bit of controversy when I first published my blog post about it, but I’m extending the discussion for my column because it’s something that’s very important to me, and something I’ve been thinking about since high school. I also believe the implications extend beyond the clothes we wear onstage into the perception of women as professionals in the music industry. Simply put, I think the orchestral dress code needs to become more adaptable to the times and allow the flexibility for both men and women to wear more of what they want. Obviously, there are clear lines between what is acceptable onstage and what isn’t, but I think some of those lines need to be adjusted.

I’ll provide myself as an example. In my senior year of undergrad, I was the principal flutist of my university orchestra. As a part of our first concert of the season in August 2016, we played Dvořák’s Symphony No. 8. Below is a photograph, taken by Dr. Blake Tyson, during our performance of Rhapsody in Blue with piano soloist Dr. Neil Rutman.  You can see me seated just behind the second violins. The black dress I wore that night was a modest scoop neck — made for a summer performance, I thought, with thick straps on my shoulders and a skirt that went below the knee. I also wore black tights with my dress shoes. My mom had asked to borrow the usual 3/4 length-sleeve wrap I wear onstage, and I willingly loaned it to her, figuring I would be hot under the stage lights in any case. Nothing about the outfit I wore that night struck me as immodest or inappropriate — I was merely dressing for the onstage conditions. So I had bare arms and no one else did, but it was only one performance, right? After that, I could have my wrap back.

After the concert concluded, I dropped by the afterparty hosted by the orchestra’s board, as I would be the incoming student representative in the spring term and wanted to network with my future colleagues. As I was sitting down after some socializing, the principal violinist came up to me and advised me that in the future, I needed to cover my arms when I was onstage, in order to not risk being “distracting.” She was in a blouse that had sleeves to her wrists, and a floor-length skirt. I was a little surprised at the reprimand, but I explained that I did usually have a cover, and all was well. I went home feeling a little perplexed but brushed it off.

Later in the term, we performed the William Tell Overture, and I was delighted to play another staple excerpt — especially with such a wonderful group. Before our final dress rehearsal, the conductor was reminding the ensemble of the dress code, as was normal. What shocked me was what came with his specific reminder to the female members of the ensemble to cover their arms, due to audience complaints that they had been distracted by bare arms during the music.

I stayed silent, but I was furious. At that moment, I felt that he was essentially blaming us, as women in the orchestra, for the lack of attention the audience paid. Was I supposed to sacrifice my ability to play well in order to keep the focus of an audience that clearly wasn’t paying attention to the music anyway? I felt that my hours of practice that went into every concert were being ignored because someone was too fixated by my bare arms — which I bared not out of spite for tradition, but in order to play my best — to focus on the music. Was that really my fault, and not the fault of the person who couldn’t keep their attention on the music they paid to hear? It made no sense to me, and in many ways, it still doesn’t.

The burden of the audience paying attention should not fall to the musicians in the orchestra; it should fall to the audience who pays for tickets to hear us play. If you find yourself unable to muster the self-discipline to ignore a woman’s bare arms while she performs on a hot stage, maybe you should reevaluate your priorities before telling us that arm-baring modesty is inappropriate. It harkens back to a time when women were treated as second-class citizens, and it is a mindset I wish to at least dramatically reduce — if not eradicate — in 2019.

When I first posted about this, many of the men I knew were upset that I hadn’t focused on their issues with the tuxedo. I’ve listened to my male colleagues complain about their tuxes at almost every performance I’ve been in for six years, and I’ve adjusted enough bow ties for my male friends over the years that I can see how wearing one would be a serious difficulty — especially as some of my string-playing friends pointed out. However, I suppose I was unaware of the true level of discontent among men who have to wear tuxedos because I’d never heard anything that amounted to more than a level of idle complaint. None of them seemed to want to challenge the norm, as I tried to do in my original post.

So now, with an understanding that a “polyester fabric prison” (as one friend called the tux) isn’t an ideal standard for men in the professional world either, the best option seems to be a simple black button-down and black trousers — what some refer to as “artist black,” as we did in the wind ensemble at my undergrad. This was first suggested on my feed by flutist Leah Stevens, per what the NY Phil had just done in amending their dress code to allow women to wear pants.

To me, this seems like a good middle-of-the-road compromise between those who want to maintain a type of uniform and folks like me who want a little more freedom. This would also eliminate the need for neckwear, which can be constricting for wind players, and men who get warm on stage also wouldn’t have to worry about taking off their black jackets and alerting the audience to their presence with their white shirts. In addition, this would accommodate non-binary or gender non-conforming musicians who might feel uncomfortable in either of the specific uniforms.

The only issue I could foresee would be a debate on whether or not to show forearms. Personally, I don’t find showing the arm below the elbow remotely offensive — elbow-length blazers are perfectly modest, and can also be a fashionable choice for women like me who want to modernize their orchestral wardrobes. This would also give string players a little more freedom not having to worry about cuffs getting in their way, and they could potentially be somewhat cooler under the lights — especially in a color that absorbs heat as I discussed above.

When my first post went live, a high school friend pointed out that clinging to things like a rigid dress code is one of the reasons many people view classical music as an outdated and out-of-touch institution. Another friend made a brilliant point on my feed with her own story, summing it up like this — “When you change something for one, that’s privilege [sic]. When you change something for all, that’s accessibility, care, and equality.” I’ve felt for years that it’s time to bring the orchestral dress code out of the 1800s and into the 21st century. I believe a way to do that exists, while still honoring tradition. This needs to be an ongoing discussion amongst professionals in the industry.

Flutist Mary Hales is a native of Conway, Arkansas, currently studying under Alice K. Dade at the University of Missouri School of Music for her Masters in Flute Performance. Follow more of her writing at maryhalesflute.wordpress.com; find her on social media with the handle @maryhalesflute.