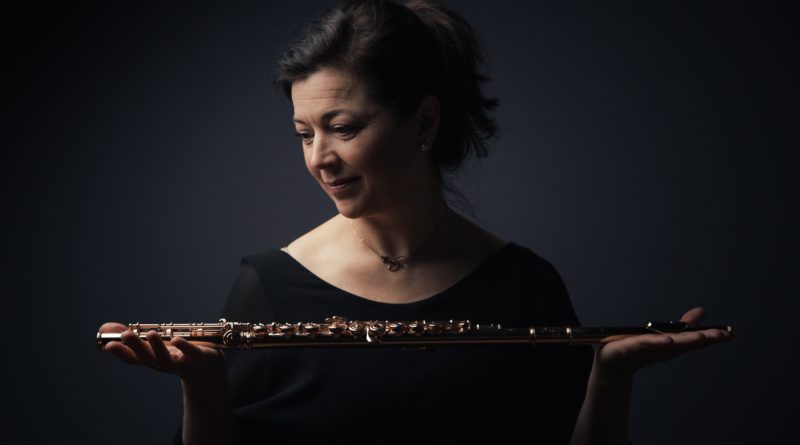 Emily Beynon is principal flute of the Royal Concertgebouw Orchestra, Amsterdam. Born in Wales, she studied with William Bennett at the Royal Academy and with Alain Marion in Paris. Equally at home in front of the orchestra as in its midst, Emily performs regularly as concerto soloist and also as chamber musician and has recorded eleven solo discs to date. A passionate and dedicated teacher, Emily is regularly invited to give masterclasses all over the world.

Well, I think, starting at the beginning - getting my place to study with William Bennett and the Royal Academy of Music in London would have to be my first highlight. I had decided to make it difficult for myself to get into music college as I knew that competition would be fierce once I'd left. Getting a place at my first choice with SUCH a fabulous teacher and musician meant the world to me.

The second would be getting my first job; I was still in my final year at the Royal Academy when I was offered the position of principal flute in the Glyndebourne Touring Opera. Although my parents were classical music lovers, they were neither of them particularly fond of opera – so when we did three “greats”, Cosí fan tutte, La Bohème and Jenůfa in my first season, the magnificent world of opera opened to me - and I LOVE it.

My third highlight came four years later (1995), when I won the same position of the Concertgebouw Orchestra in Amsterdam, I simply couldn't believe it! Actually, to be honest, I STILL can’t! So my fourth career highlight would be my recent (1st September 2020) celebration of 25 years in that position; my, my... how time flies when you're having fun! I love my job so VERY much - the AMAZING music, the incredibly inspiring, supportive and encouraging musicians around me every day, the fantastic, world-class conductors and soloists who join us week in, week out – it is a HUGE privilege and in the very best sense of the expression, "every day is a learning day”.

As a soloist, playing the premiere (yes, really) of the Nielsen concerto at the Proms in London in 2015 would be pretty difficult to surpass, so that would have to be my fifth; I don't think I've ever been SO utterly terrified in my life (the hall has a capacity of more than 5000 people), but it was such a huge honour to have been asked and the entire experience was absolutely thrilling. As a schoolgirl, I cued up all day, sometimes for multiple days to get into a concert at the Proms and if you had told me then, that I’d be playing there myself dozens of times with various orchestras and even three times as a soloist, I would NEVER, EVER have believed you!

What do you love most about teaching?  masterclasses?

I love teaching! I come from a long line of (classroom) teachers, and have taught every year but one since I was 18 - it has been not only a great pleasure, but it has also TAUGHT me so much. Throughout my time at the Academy, I taught every week in a girls’ school although I was barely older than the students and frankly, aside from my enthusiasm and conscientiousness, I couldn’t really offer them very much as I didn’t really know what I was doing. Then five years later, once I came back from my year of study in Paris (with Alain Marion) I was awarded a 2-year Fellowship at the Royal Academy which meant I got to work with all the wonderful woodwind students there; I coached chamber music and set-up a series of seminars - sessions when we could openly discuss issues which had never been addressed during MY time there; programming, applying for orchestral jobs, stage fright, practice structure, creating performance opportunities etc. Then in my second year in the orchestra in Amsterdam, I was offered a position at the Royal Conservatoire in The Hague. I taught there happily for 11 years, but then left in 2007 and decided to found my own flute school together with business woman and amateur flautist, Suzanne Wolff; we launched the Netherlands Flute Academy in 2009. (for more information see: neflac.nl)

I love 'telling the story' and communicating with the audience through the music. As a child, I was never very good with words and often found it difficult to express myself, but with the flute and through telling someone else’s story, I felt “brave enough” to share my emotions….

I see the job of a performer as being rather like that of a translator - it's my job to decipher our strange code of black dots on horizontal lines into emotions, characters or atmospheres. I once read an interview with the British pianist (and 1970 Tchaikovsky competition winner), John Lill, who said that, "the performer should be like a transparent pane of glass through which the audience can see into the composer’s soul, brain and heart” - I thought that was beautiful. I strive to be that pure pane of glass by constantly trying to puzzle over what every dot, dash and line on the page, every single clue left by the composer, might mean in terms of musical intention. This is at the same time both extremely concrete and indisputable (the markings on the page) and at the same time, completely subjective (what do I think that marking means) We could say that the ‘constant' is the asking of the question and the variable (sometimes even from day to day) is the answer.

I have recorded 11 “solo" CD’s to date; 1 flute and harp (with my sister, Catherine), 3 flute and piano, 1 chamber music and 6 concerto discs, ranging from the Mozart G major concerto to several new concertos written for me.

2020 will see the launch of a new project which I’ve dreamt of for a very long time. Together with pianist, Andrew West - my duo partner of almost 23 years - we’ll present a series of 5 CDs of Second World War masterpieces; each disc represents a different country/countries and the first one, including the Carl Frühling Fantasie (which I had published 10 years ago), the Hindemith Sonata, the Frank Martin Ballade and the Boris Blacher Sonata will be released in December 2020. (for more information see: projectpaloma.com)

Well, thanks to COVID-19, your guess is as good as mine! But I CAN tell you the plans that I would have to change if the second lockdown appears. 😂

In late October I’m performing the Mozart D major concerto together with the 'Magic Flute Dances' by Jonathan Dove - written for me in 2000 and which I performed at the NFA in 2004, conducted by my dear friend, Ransom Wilson. I’ll be playing them in a series of concerts in Germany; we were meant to give 4 concerts (each with Mozart and Dove), but due to COVID-19, one was cancelled… but the other 3 all became double concerts! Due to the new restrictions on audience numbers, many venues in Europe are repeating shorter concerts to enable more people to attend each evening. So, with 2 concertos per concert and 6 concerts, that will be a busy week!

Then I have a flute festival in Norway in January and two more concertos in Scandinavia in February and March; Nielsen in Denmark with former flute player, Jaime Martin conducting and the Carl Vine Concerto in Finland in March… which I will be playing at the NFA in Washington in August too.

These are all in addition to my work with the orchestra and in the coming few months we have some great conductors coming; Dudamel, Gergiev & Luisi.

Teaching remains a important part of my working life and aside from some one-day masterclasses at European conservatoires, the teacher’s network (DocNet) programme at Neflac (and working towards our 11th Summer Academy), I’m looking forward to ‘virtually' visiting Marina Piccinini’s Peabody class… and I also hope to find time to keep adding tutorial videos to my YouTube channel: youtube.com/c/EmilyBeynonflute

Finding a healthy work/life balance! Being a musician is not work or a job, it’s a way of life. “Find a job you love and you’ll never work another day in your life” is a beautiful saying and it’s very true. I am lucky enough to have found the job I love (musician) and it is a huge privilege to be able to earn a living by doing what I love. More than that, my work is hugely varied too. But the down side is that I can all too easily (even with great pleasure!) work all day, every day - and apparently that’s not very healthy! 🙊

What are your goals professionally?

If truth be told, if my working life in 10 years looks and feels pretty much as it does today, I’d be one very happy lady! And whilst that sounds like standing still, I notice that learning pieces and staying in shape simply costs me more time these days than it did 20 or 30 years ago - so believe me, being where I am in 10 years time will involve a great deal of work! I’m thrilled that my dream of Project Paloma is all finally coming to fruition and there is a VERY exciting new concerto in the pipeline too which will certainly keep me busy!!

To be honest, I think that I get inspiration from many different sources; musically - my colleagues (orchestra or chamber music) and my students and outside music, my dearest friends (& some of them are musical inspirations too), books and walks in nature; I’m trying to walk the entire coastline (1440 km or 900 miles) of my home country, Wales - in about 10 sections. It’s a long-term goal, especially now that COVID has made travelling so much harder...

Who were your music mentors? and what did you learn from them?

William Bennett - a most fabulous and inspiring teacher, musician, human being and flute player. I loved that he allowed all his students to find their own voice. You can somehow always tell a WIBB student, but it’s certainly not because they sound the same.
Mariss Jansons - an amazing conductor and musician; I loved how utterly intensely he rehearsed, but then somehow found the ability to let go and surrender entirely to the music in the concert, knowing that it was all thoroughly well-prepared. I feel so lucky that he was my chief conductor for 11 years.

Nicolas Harnoncourt - another incredible musician from whom I learnt SO much about (old) music. I was lucky enough to have worked with him many times both in the Chamber Orchestra of Europe and also the Concertgebouw. I would encourage everyone to read one/some of his books: Music as Speech and The Musical Dialogue - just fabulous.

- I’m an avid reader and my book club has been running for more than 9 years
- I am currently rather addicted to spinning lessons at the gym
- I started painting classes a couple of years ago and my fantasy job is an art forger!!
- I love spicy food and during lockdown, I found myself bulk-ordering Madame Jeanette chillis - they’re my favourite and are rated 125,000–325,000 on the Scoville scale
- for the flute section annual summer party, my colleagues always ask me to make my raw, vegan chocolate cake

My motto for Neflac is “work hard, have fun and share you passion for music”
I would only add to that, be reliable and... listen to live music!