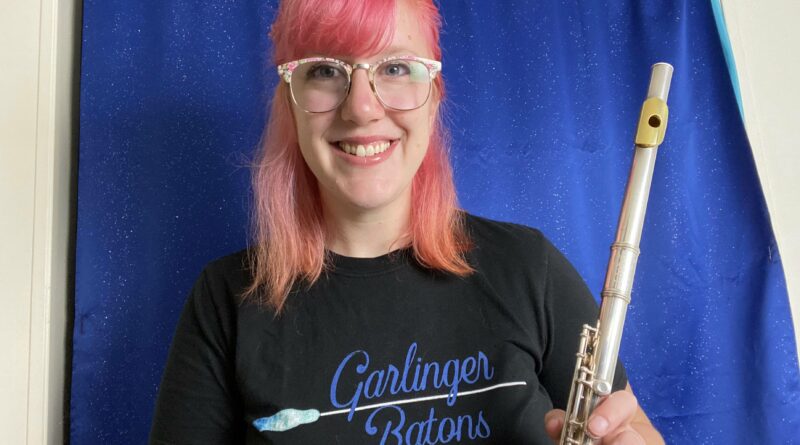 Tell us about your flute life.

When I was younger, I had always admired flute players and how they were able to make a long piece of metal sound just like a bird. It was inevitable that the first instrument that I wanted to try in fifth grade was the flute! My director was certain that that was my natural instrument, but being who I am, I wasn’t satisfied until I tried every other instrument! She was right, of course, and I ended up falling in love with playing as much as I had listening to professionals. Now I play in my community band year round and in the pit orchestra for musicals at our local theatre.

How did Garlinger Batons come about?

Adam and I had been talking for a while about starting a business of our own. A bowling alley with a bakery in it? A mobile coffee shop? By the time February 2020 rolled around, we had abandoned the coffee shop idea and I went back to working at a daycare. When the pandemic hit, we were both out of work for a few months. I opted not to go back to the daycare because my youngest son did not adjust well and there were next to no protections for the teachers.

A few weeks later, we went on a camping vacation with family. In June of 2020, we were caught in a severe storm with straight line winds. The rest of us sought shelter in my in-law’s camper, but Adam saw our son’s bike helmet roll away toward the lake. He made the split second decision to go after it. On his way back, there was a sickening crack as a huge white pin oak fell right on top of Adam.

There seemed to be an invisible cushion of protection around him when we finally were able to see through the rain and the tree. If Adam had been laying six inches in either direction from where he was, I would be telling an entirely different story. As it was, Adam broke the top of his femur and was bed ridden for weeks. As soon as he was able, he grabbed his walker and hobbled out to the workshop. Turning on the lathe was the therapy that he needed to be able to heal from the trauma of this freak accident.

With so much time off of work and a burning entrepreneurial spirit, Adam and I threw ourselves into creating an Etsy account with batons, woodworking shirts, and clay creations (we were all over the place!). I noticed that the batons were selling pretty well, but I wanted more control over the story that we could tell to our customers. At the end of October 2020, we launched GarlingerBatons.com and have continued to grow from there! Thanks to social media, we have been able to reach 44 states, Canada, and the UK!

What is the part that you enjoy the most about Garlinger Batons?

The most enjoyable part of Garlinger Batons is how much fun we are able to bring to the conducting baton niche! When Adam was in music school, he gave me the rundown of the baton options as: either a wood handled baton or a cheap plastic baton from the music store. While there's nothing inherently wrong with either of those options, they don't come close to having a shimmery baton in your favorite color!

Having a business was also a great excuse for me to get on Tik Tok and make silly videos! Who knew there would be so many people interested in comedic videos about fancy sticks? It’s been an incredible amount of work, but owning this business has been an amazing experience!