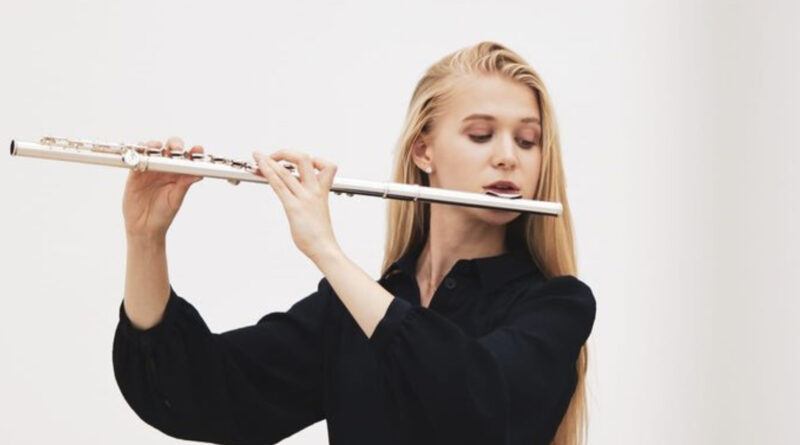 Kateryna Movchan was born in 1996 in Luhansk, Ukraine. From the age of five to the age of 20, she was tutored and mentored by flutists Olga Soboleva and Vladimir Turbovsky. Thanks to the support of the Austrian flutist Barbara Gisler-Haase, who presented the young musician her first professional flute, Kateryna played  as a soloist with the Luhansk Philharmonic Orchestra under the baton of Maestro Kurt Schmidt at the age of 12.  During her studies at the Kyiv Specialised Music School (re-named M. Lysenko 2012-2015), she performed as a soloist with National Music Academy named P. Tchaikovsky, National Philharmonie Orchestra, "Kyiv Soloist" Chamber Orchester and "Kamerata" Chamber Ensemble. As a student in the National Music Academy named P. Tchaikovsky she started to be a member of Kyiv Opera Studio Academy. In year 2016 she became a Principal Flöte of MNYO. In 2017 as a member of this orchestra Kateryna performed in the Berlin Konzerthaus.

Since 2017 she has continued her studies with Prof. Dietrich Flury at the University of Music and Performing Arts in Graz. In the same year she took part in the "Music in the Alps" Festival, where she won 1st Prize in the category "Soloist with the Orchestra". In the spring 2019 Kateryna was invited to play a music tour in the USA;  she had a solo recital in the Baruch Performing Art Center, Stamford Ukrainian Museum and also performed at Carnegie Hall with pianist Irena Portenko. She also has performed in the National Philharmonic of Ukraine, Haus der Musik (Innsbruck), Mirabell Palace (Salzburg), Musikverein Graz, Harbin Opera Haus, Xinghai Concert Hall. During the 2021 Kateryna took part in Tampere Music Festival where she won a Masterclass with Silvia Careddu. In the summer she played in Styriarte Festspiel-Orchester Youth under the baton of Maestro Andres Orozco-Estrada. In Autumn she was invited to become a member of Junge Philharmonie Wien. In Oktober Kateryna Started her Masters Degree with Prof. Matthieu Gauci-Ancelin.

What does this crisis in Ukraine mean for you?

Since 24th of February all my thoughts are occupied by the war in Ukraine. Every waking hour I am thinking about my family and friends that are in the cities bombed by Russian army. Every morning I call my parents just to hear that they survived the night. This is an extremely stressful period in my life. But I managed to challenge this stress into something productive. I wanted to help my family, my friends and all people that are suffering today in Ukraine, that’s why I dedicate my time and work to collecting humanitarian aid for Ukraine. I can't imagine myself  just sitting without doing anything in such hard times.

Can you tell us a bit about the history of Ukraine with Russia?

The history of Ukraine and Russia is a constant struggle of freedom loving Ukrainians and imperialist Russia. Since the 17th century, Ukrainians have been struggling against one of the biggest empires in the world. At that time the Russian empire was doing everything to eradicate Ukrainian culture. Russian tsars forbid Ukrainian language, culture and music, and tried to reduce Ukraine to “Malorosia” - Little Russia. But Ukraine persisted and managed to create a distinctly beautiful culture and identity.

When the Russian empire fell and morphed in the Soviet Union, Ukrainians were still a problem for tyrant Stalin. In order to inhaliate our nation Stalin starved milions of people in the genocide know as Holodomor. However, after all these struggles Ukraine became an independent country in 1991.

And your personal history with Ukraine?

I was born in Lugansk, a city in eastern Ukraine. I spent my entire childhood there, and I remember my homeland with fondness. The homeland that was taken away from me in 2014. In 2012 I continued my studying at the Kyiv Special Music School named after Mykola Lysenko. In 2014 my whole family moved to Kiev. We realized the horror of the war 8 years ago, it has been 8 years since I was not home. One of the most tragic memories of my life is the last day I spent at home in Lugansk... sirens sounded so loud and explosions were heard everywhere.

What do you think are the issues with the governments?

The biggest problem is that the Russian government is controlled by one person - Putin. The person who instead of taking care of his people dreams about rebuilding the Soviet Union. I also see a problem in many Western governments that saw Putin’s imperialist plans in 2014 and didn’t react with resolve. Weak reaction to the annexation of Crimea in 2014 is one of the main reasons why Putin thought that he could invade Ukraine now. Even now, after thousands of dead civilians, Western countries refuse to put a whole force of economic sanctions on Russia. European countries are still paying billions for Russian gas, effectively sponsoring Putin’s war machine.

How has this affected Ukrainian musicians?

Of course, nowadays people of art as well as the entire population of Ukraine, are not at all concerned with art. It is impossible to sing when the only melody in your head is sirens, it is impossible to paint when there are only two colors of war around, red - the blood of dead civilians, black - the smoke from the bombing and the ruins of former houses. It should not be forgotten that people have a hard time not only mentally, but also physically. Some cities are completely occupied, there is no water, no food, no hygiene, no warm clothing. People are dying of dehydration, and this is happening in the center of Europe, in the 21st century.

Still, I would like to note that during the month of war, many Ukrainians from the art sphere are very supportive and carry Ukrainian culture far beyond the borders of our country. It's a pity, but in art, very often terrible events are inspired to create masterpieces. I am proud of all the musicians who in such difficult times find the strength to continue playing music, as well as all my musician friends who are now in Ukraine, I am proud of you and dream about the day when we will play together again! Music is our cultural heritage! We must preserve our culture and proudly perform the works of Ukrainian composers.

What can we do to help?

Spread the word. Tell the stories about people from Kharkiv, Chernigiv, Mariupol. Tell the stories of Ukrainian parents who lost their children to Russian bombs. The horrors that are happening in Ukraine can not be ignored.