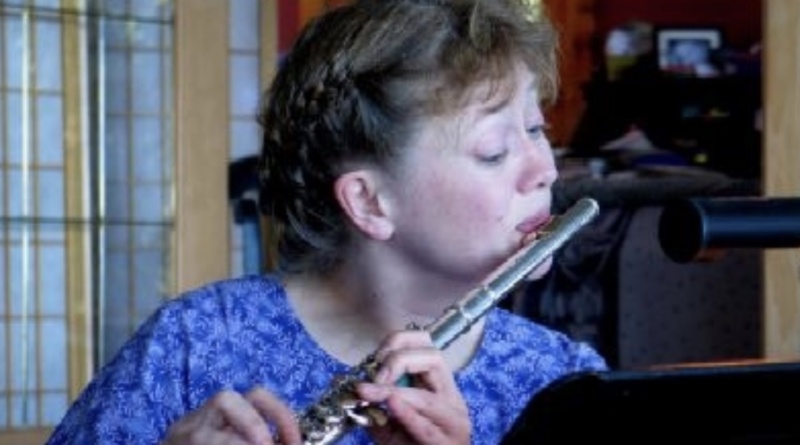 I've had some questions from student flutists lately about "what is anchor tonguing?".

So I drew some quick sketches. The truth is that no one can see inside your mouth, so you are the head scientist when it comes to discovering where the tip of your tongue is. So let's start with what I can show you.

Anchor tonguing is when you anchor your tongue tip and never move it again but literally brace it against a surface inside your mouth. This type of anchoring has also been called "Na" tonguing, because the flutist can't use the tip anymore (because it is braced with pressure against the inside of their mouth) and so they say "Na" whenever they tongue a note, by humping up the middle of their tongue and using it against the center roof of their mouth. Here is a picture of the tip of the tongue anchored behind the lower teeth. 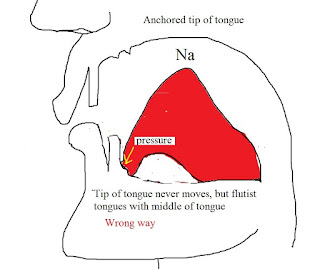 Another kind of anchor tonguing is when the tip of the tongue is anchored in front of the lower teeth, and supports the lower lip.
Tongue Supported Lower Lip 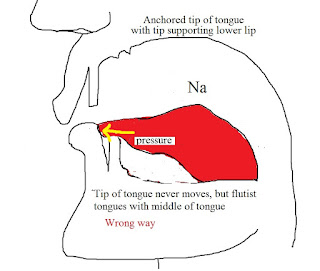 When the tip of the tongue is pushing the lower lip forward, acting as a cushion that pushes the lower lip outward, then the student might be even more frustrated when they finally remove the tongue tip from supporting the lower lip from behind, because the lower lip has always had the tongue's support, and doesn't know where to put itself to play the flute without the tongue's help. In this case it can take one to five weeks for the tone quality to come back, once the student learns how to form the lip embouchure without the help of the tongue's pushing the lip from behind.
The reason you need to un-anchor the tip is because you cannot double tongue at fast speeds, if you cannot say Du-Gu-Du-Gu or Tu-Ku-Tu-Ku really fast, due to having anchored the tip of the tongue.
Correct Tongue Placement for Flute
Correct Position for Tongue when at Rest 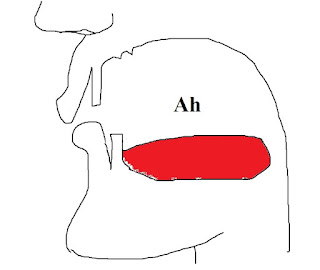 The tongue of course, really needs to lie flat in the mouth like a carpet. If that feels too heavy, imagine a lightweight, fluffy pillow lying on a floor. This resting position is used when you're either resting the tongue, or when opening the inside of your mouth cavity to play with a large resonant sound. You don't want to force the tongue flat, and add any tension, but it should be well out of the way so your mouth cavity can be like a cathedral with a huge space for the flute's sound to echo into.
Other placements of the tongue are also useful to know. They follow the vowels of singing: Ah, Eh, Aye, and Eee (and even "ooh" for very soft forward playing). They are all done with the tongue rising vertically (like an elevator going straight up) as when you say the syllable "Eh" (as in elevator) or "Eee". 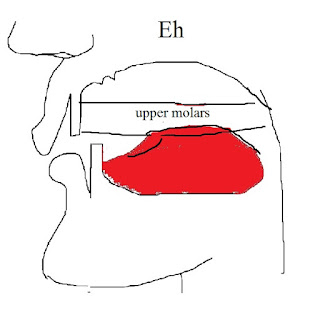 With "Eh" the tongue is curved, with the sides of the tongue able to feel the inside face of your upper molars. This is good for mezzo forte fast tongue passage work. 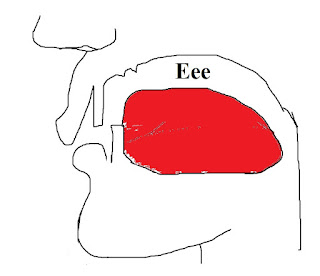 When you are saying Eee, your jaw has closed more, your mouth cavity is smaller, and the sides of the tongue may be touching the insides of your back upper molars even higher. For rapid tonguing in the high register, this can be a helpful position.

And of course, you'll find this all out in your flute lessons. No rush; it is all taught in stages to make it easy.

But do take a look at the tongue's tip in these drawings.

The tip should not be pushed against anything, but should be free to move and easy and light in its very small motions up to the roof of the mouth, and then flick straight down again to its starting position. Whichever movements of the tongue you make they must be very much like singing or speaking. They are very simple movements, you just have to know where in the mouth the tip of the tongue is.
To feel this: you can sensitize the tip of your tongue by biting the tip just lightly until you can feel your tongue-tip nerve endings.
Next:  allow your tongue to lightly touch the backs of the bottom front teeth. This is where the tongue is every time you are simply playing a long note. Look at the above picture and notice there is no pressure where the tongue is lightly resting against the inside of the lower teeth.
Correct Position for Tongue when saying Du or Tu 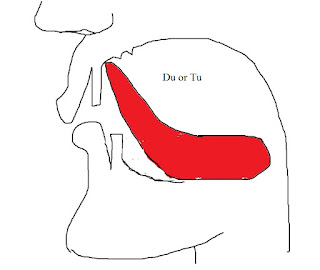 When you say Du or Tu (both are used in flute) the tongue tip rises up to the roof of the mouth behind the front teeth, says the D or T very lightly, and then returns to the first position, where it is lying down relaxed on the floor of the mouth, the tip still lightly touching the back of the front bottom teeth.

Get help from your private teacher in learning this correct way of tonguing, and don't get worried if it takes a few weeks to master. You may have to get rid of a lot of tension to have a loose, light and relaxed tongue that is no longer working so hard, but has found a simple, ergonomic motion.

Hope this helps for those who are confused about "what is anchor tonguing". It may have arisen because:

- the flutist is speeding up their air-speed by using "tongue-assisted embouchure" where they are saying "ewe" or "euu" or "eee" with their tongue, crowding the front of their mouth-space, and thus speeding up the air as it runs through a narrow passage (the Venturi principle). Their forward bunching tongue is so far forward that it is spilling into the lips from behind (and so they can feel the inside of their lips with the tongue's front half.)

- the flutist is pushing the flute too hard into their lower lip or too high on the lower lip, and needs the tongue as a cushion to temper this arm-pressure and lip-crushing pressure. The answer of course is to learn to play without pushing the flute into the chin so hard, and to lower the pressure of the lip plate (covered in Roger Mather's books, vol. 2).

- the flutist is blocking the air from escaping by bracing the tongue to let the pressure build up behind it (you'll hear this as explosive tonguing). Rather than playing with fast and supported airstream, they've taught themselves to pressurize their tongue and mouth and explode on every note. This needs a teacher's help to develop good air speed instead of pressure-valve-explosion air-speed.

- the flutist simply didn't know where their tongue was, and didn't realize there was a problem until they had more tonguing demands put upon them (they improved to the point of needing double tonguing.)

But I did want to clear up what is and is not "anchor tonguing" because when you google it, you get everyone wondering the same thing, and no one quite clearly understanding what it looks like because none of us has mouth-cameras. :>)

While I'm here blathering, I also want to comment on other disruptive things the tongue can do, so called "French Tonguing" which I've mentioned before. So far there is no proof that any flutist uses "between the lips tonguing." even though there's always someone who extolls its virtues, I've never seen a single bit of proof that it's ever used under normal circumstances. I call it "Lip Disruptive Tonguing".
Here is a picture of that. Avoid it; not useful in real music. 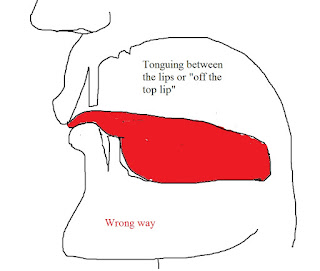 Paul Edmund-Davies mentions "tonguing between the lips" and demonstrates it for a single note just as an experiment in his videos (linked to earlier blog post). But I would say, don't bother learning how to tongue between the lips unless it is only the first stage in your getting rid of anchoring your tongue tip.

Letting your tongue tip learn where everything is on the inside of your mouth is an easy and quick exploration any of us can do. Touch the tip to every surface and move a tiny amount and find the next surface.

Explore all the places your tongue tip can be in your mouth.

However when it comes to flute articulation, use the easiest possible method: Say Tu-Tu-Tu-Tu or Du-Du-Du-Du, or even Hoo-doo-hoo-doo-hoo-doo to see just how easy it is to speak the articulations using words. If you can say it, you can do it on the flute. You just have to discover your own tongue's way of moving freely.

For non-anchor tonguers, remember too that easy, clean tonguing on flute with great tone requires fast fast air with lots of lung involvement. It doesn't require any change in your lips. In fact changing your lips when you tongue is another whole problem that people don't realize they're doing.
So... Lots of articulation advice here.

Principal Flute of The Vancouver Island Symphony from 1995 to 2006, Jennifer Cluff holds a Bachelor's degree in Flute Performance from The University of Toronto's Faculty of Music, where she studied under Nora Shulman, Principal Flutist of The Toronto Symphony, and Douglas Stewart, Principal Flute of the Canadian Opera Company. Jennifer is also an Associate in Performance with The Royal Conservatory of Music, Toronto (A.R.C.T.), where she was the winner of several notable competitions and scholarships Ms. Cluff has appeared on numerous occasions as a soloist with The Vancouver Island Symphony, and performs frequently in recital on Vancouver Island as a chamber musician and as a guest artist in other musical ensembles. She has attended the masterclasses of Flutists: James Galway, Jean Pierre Rampal, William Bennett, Patrick Gallois, Paul Edmund Davies, Susan Hoeppner, Julius Baker, Jeanne Baxtresser, and jazz flutist Moe Koffman.
In 2006, Sir James Galway became intrigued enough to ask to be interviewed live on Fluteloops, Jennifer's mp3 online radio show, as did 'Stagefright in Musical Performance' author Michael Goode. Jennifer was also profiled in The Flutist's Quarterly, magazine of The National Flute Association in the fall of 2010. Ms. Cluff has also acted as a woodwind/flute adjudicator, and been warmly welcomed back to the Pacific Northwest Music Festival in 2005 and 2008. In 2010 she will adjudicate in the Richmond Festival. Jennifer has also taught flute for University of Vancouver Island, Malaspina College and The Nanaimo Conservatory of Music since 1993. Jennifer's articles on flute playing have recently been published in the United Kingdom's Flutewise magazine. Jen also plays the part of an online Flute-guru (just kidding, really) to hundreds of internet flute lovers, having written dozens of freely downloadable and helpful flute articles on her website.