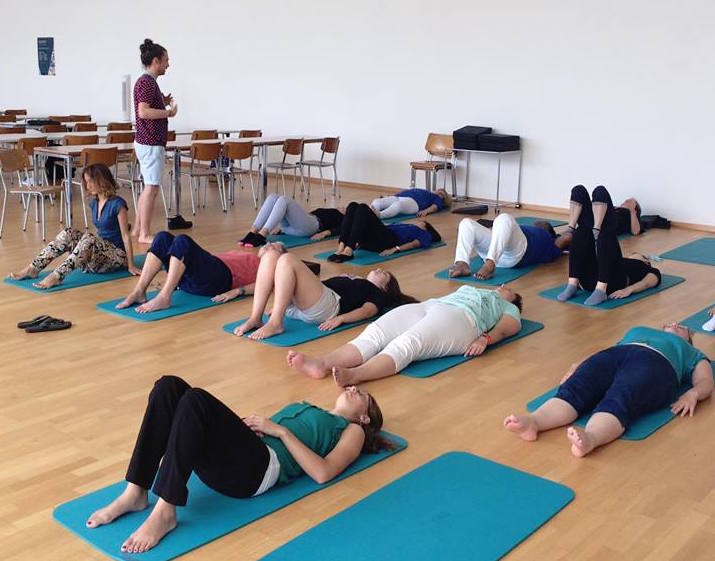 Niall O'Riordan, a 2014 Galway Rising Star, attended the festival for the seventh time this year. He grew up listening to Sir James Galway, from his earliest years in Ireland when his father would look for Sir James' records every Friday from a second hand shop.  Like most of us, he listened to Galway's recordings every night for many years, his favorites being the Bach E Major Sonata and Beethoven Serenade. These days, Niall is not only an incredible professional flutist, but he is also a certified Feldenkrais instructor. I had the opportunity to take a lesson and speak to him more about Feldenkrais at the class.

Describe how you got into Feldenkrais.

Like any other musician, I struggled with some extra tensions in the body. I didn't have any pains, but I can remember my shoulders would be achy after playing, and I knew there was something I needed to open up physically in myself that would improve my playing.  I did a lot of yoga, but things weren't changing so much for me. I bought a class pass to a yoga studio in London, and I went to a lot of the Feldenkrais classes. We did a lesson where we would lie on our backs and extend our arm out to the side very gently; there were a lot of variations, but it was mostly about creating freedom in the shoulder joint. Before I did this class, I was lying on the floor and trying to stretch my arm out but never able to comfortably touch the floor.  There was a moment in one of the lessons, where suddenly my arm just landed on the floor in a new and comfortable way, and I knew that this stuff works! Then I decided to go to a lot more classes and started to do training, and it was only the second training they have ever done in London. Every lesson I did in the training kept coming back to my flute playing. There is a link between me being awarded the Rising Star and when I was doing the training. The second year I came back and played for Sir James, it was a combination of doing a lot of practice and my Feldenkrais training. Something changed with how I was relating to the instrument; I was much freer.

How can Feldenkrais benefit flutists, and what would you recommend to someone who is new to it?

Feldenkrais isn't as well-known as other methods such as Alexander Technique. Ultimately, the flute is a physical activity, and I think the main thing about playing any musical instrument is that it is very habitual. We stand in a similar position all the time and move in a certain way, so habitual patterns and movement get set up in the system. Some of them are very useful, but there is also a lot of extra effort that starts creeping into our self-use.  The Feldenkrais method provides a way of us learning about our habits and movements and having more choices, so we can let go of some of that extra effort that we use.

As far as good first steps for flutists, I have recorded two series of lessons, one is called "Breath and Balance (Volume 1)" and the other is "Better Tone and Jaw Comfort." Those are good introductions because I frame it in a way that flutists can relate to the lessons. Both programs are almost 4 hours of audio, so it is in-depth and can be done over a few weeks. You also do not need to go to another musician Feldenkrais practitioner. You can also attend an open public class by googling where Feldenkrais is being taught by a certified teacher in your area.

What's amazing is that he wrote over 2000 lessons, so even as a practicioner with 4 years training and many lessons, I'm still learning new things, and it still blows my mind every time.

Who exactly was Moshe Feldenkrais?

He was actually an Israeli engineer and physicist who was very interested in human potential, and interested in it through the lens of how people move. Feldenkrais was born in 1904 in Slavuta in what is now the Ukrainian Republic. That interest grew from studying judo; he saw from teaching judo, that there was an element in the groundwork that was educational about using ourselves efficiently without a separation of the mind and the body. He wrote judo books, and we can see the beginnings of the method are in these books. He had, like many people, a knee injury, and he studied it through self-exploration and his scientific mind. He really had an amazing understanding of human movement and the relationship to how we relate to our environment. Someone once said it was almost as if he was approaching the work of Freud, but rather than through speaking and thinking, he wanted to explore it through movement. He used to say that there is not one single thought that is not accompanied by a physical reaction, even if it is very small, and there isn't a separation between the two.

In his lessons, what is interesting for musicians in his public classes (Awareness through Movement), you start noticing things in your day to day life that you may not make a direct association with movement. You might notice that you may be able to deal with difficult situations better, your awareness of yourself, a better ability to navigate through emotional difficulties, and also on stage. Often when a performer goes on stage, our awareness shuts down. I think of when we perform, we should be like a shining light, and our awareness should pervade the entire environment where we're playing, and in some ways we're a channel for the music. But often when we go on stage, our awareness shuts down, and we go more into ourselves, and we become less aware of what is happening in our environment with the audience. Feldenkrais helps you become aware equally of yourself and your environment.

Niall O'Riordan gives us an introduction to Feldenkrais.