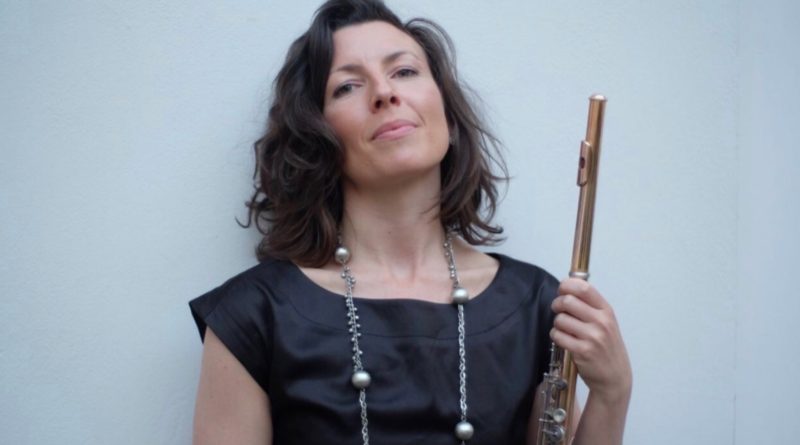 Christine Elizabeth Clancy is an American flutist living in Sweden. She is an active orchestral musician and a founding member of Trio Sumbisori. As the creator of Effortless Musician, she provides performance coaching, audition training, musicians’ yoga, Timani teaching, and all-around positivity. Christine holds a Bachelor of Science degree in neuroscience from Brown University and postgraduate flute performance degrees from conservatories in the UK, Sweden, and Denmark. She is in training to become a Timani Master Teacher at the Musicians’ Health & Movement Institute in Norway and she believes in you.

“I can’t do anything with you until you fix your breathing.”

These actual words were said to me by a world famous flutist in a fancy masterclass in 2012. Not quite what I was going for if I’m honest. He explained how I should breathe instead (deep breath into my belly, like a baby) and sent me off to wonder what in the world I was going to do about the next four times I had to play for him that week.

That experience set me off on a mission to fix my breathing and figure everything out so I could go back there one day and show ‘em. The trouble was, despite how diligently I practiced, things didn’t get better. In fact they got worse. I got very tense, my sound became full of air, I had no inspiration whatsoever, and for a while I could barely hold my flute without shaking because I was so anxious (alone in my practice room!). Mostly, I was terrified by how much my reality didn’t match my expectations: I had just finished my masters and was supposed to be able to be my own teacher, a professional. But I felt broken.

I’m very stubborn, so it took a while before I accepted that I needed help. I felt ashamed but finally went to a teacher I trusted. She helped me start my path to recovering my playing in a realistic and nonjudgemental way; it was refreshing to focus on problem-solving instead of problems. I worked hard and things improved. I studied elite performance training and deliberate practice so I could do better in orchestral auditions. I practiced as much as I could, got more gigs, and after a couple years I even got accepted to an artist diploma program. My hard work produced a lot of improvement, but I felt like I was hitting a ceiling. Something was still missing.

As you can probably imagine, I had some hang-ups when it came to breathing. I’ve always had good lung capacity (I was a swimmer), but for a long time it felt like I couldn’t get to the top of my breath, both with and without the flute. I had enough air to play Mendelssohn and Debussy, but it was a troubling and uncomfortable sensation to not be able to fill up my lungs. I asked various teachers and even went to a highly recommended physiotherapist, but no one could see anything wrong with me. They noticed I was tense, however, so they told me to relax.  Being told to relax when you’re stressed might be one of the most annoying things in the world.

Many musicians with injuries turn to sports medicine for help and it can certainly be beneficial. We musicians, however, are a different kind of athlete with different needs. For example, when adrenaline is released under stress, your body’s resources are shifted to prioritize certain muscles that are meant to get you away from danger. This might be great if you’re a runner, but those same muscles are often the ones whose excess tension is making it more difficult for us to play that delicate passage the way we want to or play a loud passage without forcing. Since I didn’t have pain, the people I saw didn’t have much to give me and common wisdom (along with the voice in my head) would conclude that I wasn’t talented enough.

I felt frustrated and lost. I was alone in a foreign country and trying to make a living chasing a dream. I wished I could just find someone who could look at me, tell me what was holding me back, and tell me how to fix it. In 2015 I did. I met Timani teachers from the Musicians’ Health & Movement Institute in Oslo: musicians who are trained in anatomy and biomechanics, how to see subtleties of movement that indicate problems or limitations for musicians, how to explain them in a way that is relevant to musicians, and how to retrain more optimal coordinations using a library of 100+ exercises. I had a particularly ghostly experience in my first Timani lesson where I literally could not believe the lush, resonant flute sound that was coming out of me; it was straight out of a dream.

Timani is a method that was created by a musician, specifically for musicians. Norwegian pianist Tina Margareta Nilssen has been studying the body in relation to music-making for over 20 years and created this continually evolving system, based on the latest cutting-edge research, to be able to be applied directly to musical performance. The biggest relief for me was seeing the anatomy of breathing explained, that it made perfect sense that I had been experiencing everything I had been experiencing. It was empowering to get concrete information about how things work, as well as exercises to train the new (to me) coordinations, particularly differentiation between abdominal muscles that promote healthy support and those that inhibit it.

Among many other equally mind-blowing things, I learned that so-called “belly breathing” is only natural if we’re lying down – sticking out the belly while standing or sitting compromises the efficacy of certain abdominal muscles which otherwise should be contributing to holding your torso upright, leading to compensations. And it turns out that posture isn’t as simple as I thought: I used to get compliments on my “good posture” (shoulders down and back, chest forward, etc.), but I learned that it was physically impossible to breathe or support optimally in that position. There are many subtle details of posture and movement that can really only be seen with a trained eye, which is why the people I went to hadn’t been able to help me. I also learned that emotional stress can have significant physical consequences on the body, both short and long term, and that it might not be possible to release the unwanted tensions until you address the underlying stress. This can often be a surprisingly efficient way to move past obstacles in one’s playing. Most interesting of all was the distinction between tension, relaxation, and activation. There is such a thing as good tension, and using it can be the key to allowing the body to release the unnecessary tension.

It became clear to me pretty quickly that I needed to become a Timani teacher. I’m not exaggerating when I say it’s one of the best things I’ve ever done: it has improved my playing in practically every way and given me the tools to work with, rather than against, my body. What I think makes Timani unique is how comprehensive it is, how clear and specific the teaching is, and the fact that musicians learn to help themselves – you can do the exercises in the practice room, backstage, or even on stage. Timani can benefit all instrumentalists and singers in preventing injury or bringing out more of their potential.

Perhaps most important was the way that the Timani teachers I met made me feel seen and heard. There wasn’t anything inherently wrong with me – I was actually a perfectly normal product of the experiences I had had and the input I had received throughout my life. It wasn’t that I wasn’t cut out to be a professional flutist – I just hadn’t found solutions to certain problems yet. The things that helped me were not the same as those that helped my teachers and peers; that doesn’t say anything about me except that I needed to learn that thing a different way, or that something that came naturally to my teacher is something for which I needed to come up with a creative exercise or get outside help. This rhymed with everything I was reading about elite performance and confirmed my belief that everything is trainable. Whether it’s physical or mental, you can improve almost anything with the right tools and the right kind of problem solving. The trick is, there is no “right” because it is different for everyone. If things aren’t working, you have to seek out something new until you find what works for you.

I am certainly not the only wind player or singer to ever be confused about breath and support. Learning and implementing the critical information I have learned from Timani has given me performance possibilities I used to only dream of, and I’m passionate about sharing it. I am the first American practitioner of Timani and I hope to teach this unique and valuable method across the US. To that end, I created a workshop which has been accepted to the Performing Arts Medicine Association’s International Symposium in New Orleans in June 2020. The workshop is titled: “Just Breathe”? Anatomically informed breathing techniques can improve performance outcomes for wind players and singers. I will also be teaching the workshop and private Timani lessons in the northeastern US in March and April.

The more I learn, the more I am humbled by the intricacies of the human body; playing music is truly a whole body experience. It is also a community experience. More than audience members, teachers, or peers, many of the people I have encountered so far on my journey have been crucial support, inspiration, and encouragement. I could not be where I am today without the knowledge, compassion, and curiosity I learned from these people. Flute is such a competitive instrument that it’s easy to hide our flaws and struggles in order to keep up appearances. But with a more open, honest, and supportive community atmosphere we can all lift each other up. That’s something I would like to support.

Christine Elizabeth Clancy is an American flutist living in Sweden. She is an active orchestral musician and a founding member of Trio Sumbisori. As the creator of Effortless Musician, she provides performance coaching, audition training, musicians’ yoga, Timani teaching, and all-around positivity. Christine holds a Bachelor of Science degree in neuroscience from Brown University and postgraduate flute performance degrees from conservatories in the UK, Sweden, and Denmark. She is in training to become a Timani Master Teacher at the Musicians’ Health & Movement Institute in Norway and she believes in you.